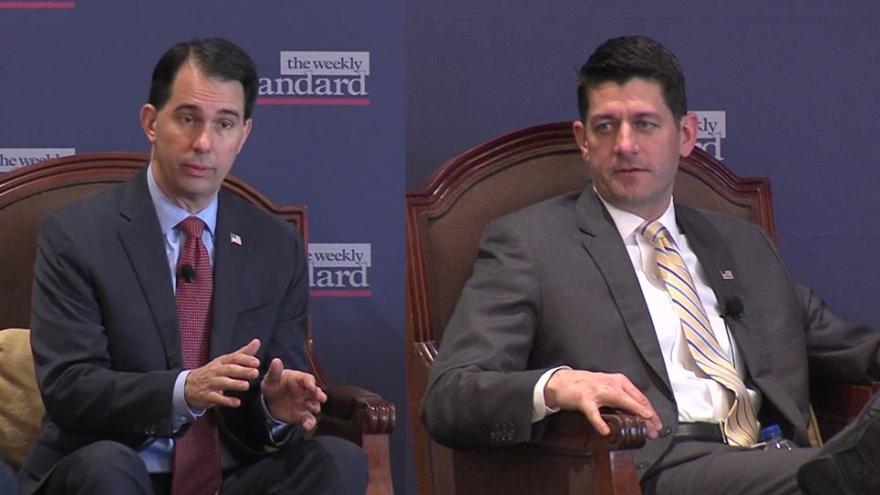 They’re trying to motivate supporters six months out from the midterm elections.

Governor Walker keeps warning his party about a potential “blue wave.” He said there needs to be a wake-up call for Republicans because Democratic voters are motivated right now.

Walker spoke Monday at the Midwest Conservative Summit at the Pfister Hotel in Milwaukee. Walker says he thinks the biggest problem the Republican Party faces right now is complacency. Walker says Republicans are celebrating the 2016 election rather than looking forward, while Democrats are getting organized and may be bringing more people to the polls.

"We've got a great story to tell, but we can't assume that our friends and neighbors know it, we gotta go out and tell that," Governor Walker said.

Walker was asked Monday if he would campaign with President Donald Trump.

“It’s going to be not a national election. It’s going to be an election about governor here, so any president, Barack Obama, George W. Bush, Donald Trump is likely to go to states where candidates need the boost, need the name ID. Good or bad, I have about 99% name ID so my issue is not campaigning with anyone outside of the state of Wisconsin. I’m going to do what I did the last tie four years ago. I campaigned with Ron Johnson. I campaigned with Paul Ryan. I campaigned with people who were in this state,” said Gov. Scott Walker (R-Wisconsin).

Walker on Campaigning with Trump from CBS 58 News on Vimeo.

The Democratic Party of Wisconsin says Governor Walker contradicted himself when he said he would campaign in Wisconsin with President Trump.

They cite a New York Times article published two days ago that said Walker told his associates he is unlikely to campaign with the president.

The Democratic Party says Wisconsinites have no trust left in the governor and that he changes what he says based on the room he's in to further his own personal ambitions.

See below for the full Democratic response:

"Gov. Scott Walker again publicly contradicted himself this morning, this time during an interview with Charlie Sykes where he said he would campaign in Wisconsin with President Donald Trump. Yet a New York Times story published just two days earlier said Walker “has told associates he is unlikely to campaign with the president.”

“This is why Wisconsinites have no trust left in Scott Walker,” said Democratic Party of Wisconsin Communications Director Melanie Conklin. “He changes what he says based on the room he’s in and will do or say whatever it takes to further his own personal ambitions.”

A political alliance and friendship between Trump and Walker played a significant role in Walker rushing to give away $4.5 billion to Foxconn in a bad deal for Wisconsin. (Walker uses it as an election-year gimmick when he isn’t avoiding talking about it.) And Trump has publicly bragged that if it weren’t for him, Foxconn wouldn’t have come to the U.S., let alone Wisconsin. Walker endorsed Ted Cruz in the 2016 presidential primary after dropping out himself, but quickly fell in line when Trump was the apparent nominee.

“Walker is too close to distance himself from Trump and his toxicity,” added Conklin. “He schemed with Trump to spend $4.5 billion on the largest taxpayer giveaway to a foreign corporation after telling Wisconsin for years that we did not have money for our classrooms or our crumbling infrastructure. The Foxconn deal wasn’t about Wisconsin’s future, it was about Walker’s political future.

“Walker has also stood by complicit as Trump has time and time again threatened our national security, democracy and shared values of community, compassion and justice with his erratic, angry and divisive behavior. If Walker cared about Wisconsin, he would stand up to Trump and make it clear that his hatred and division has no place in our state. But at the end of the day, Walker cares only about himself, his donors and getting re-elected -- not about the rest of us."

Governor Walker also talked about Foxconn, saying it will keep the state competitive and add thousands of jobs.

"I think it's part of the Trump phenomenon. He has people who love him and people who hate him. You have an enthusiasm gap that I think is what Scott is talking about because there are so many people motivated, they just don't like the president. They're hyper-motivated. But I think it's history. The history of mid-term elections does not speak well for the party who's in the majority," said House Speaker Paul Ryan (R).