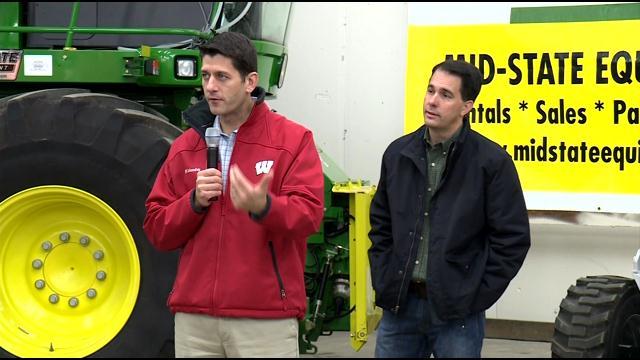 One day after Democrat Mary Burke appeared with President Clinton in Milwaukee, Governor Scott Walker was joined by Republican Congressman Paul Ryan on the campaign trail.

Along with the Governor's wife Tonette and Lt. Governor Rebecca Kleefisch, the pair stopped by a farm machinery dealer called \"Mid State Equipment.\"

The Governor said his high profile visit are much different from his opponent's when referencing a planned but as of yet unconfirmed visit before the November 4th election from New Jersey Governor Chris Christie.

\"Chris is a good, personal friend of mine,\" explained Governor Walker. \"He and his family are good friends of my family. He asked if he could come in and he's a lot of fun to campaign with so I said sure. But, obviously he's not from Washington either. If you really look at all the surrogates, overwhelmingly, who have come in of late are people who have been directed by the Washington based special interests.\"

The latest Marquette University Poll shows a shift among voters with Governor Walker showing a seven point lead over Burke.

Charles Franklin of the law school explained it this way.

\"The more motivated likely voters have sometimes been in Burke's camp. That was true in July and August, where Democrats were more likely to turn out than Republicans, and recently we've seen more Walker supporters in the likely voter. But again that shifted from one sample to the next.\"