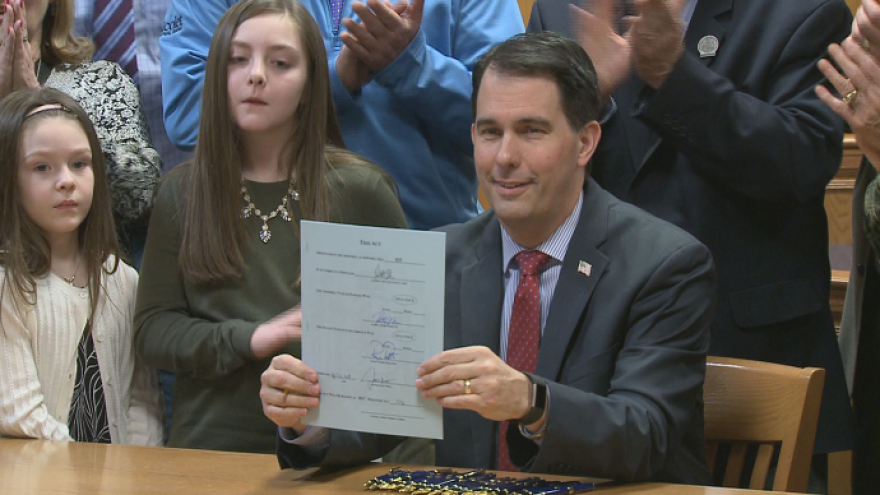 WAUSAU, Wis. (WSAW) -- Surrounded by loved ones of slain Wausau lawyer Sara Quirt Sann, inside the Marathon County courtroom named after her, Gov. Scott Walker signed a law in her name he says will better protect family lawyers from threats.

"This is one more tool in particular to make sure folks in the legal profession, legal community like Sara, who are working on issues to protect families are working to protect themselves,” Walker said.

Quirt-Sann was one of four people killed March 22, 2017 during a domestic-fueled shooting spree.

Under Wisconsin law threats to family lawyers were not treated the same as judges, prosecutors, and law enforcement officers.

With Walker's signature, Sara’s Law makes a threat against family lawyers, including children’s lawyers called guardian ad litems and corporation counsel, mean a possible felony charge. If that results in a conviction, it could mean losing weapons, up to a $10,000 fine and up to six years in prison.

The law has been a mission for Quirt Sann’s widower, Scott Sann, since the March 22 shootings.

“There's some closure in when it first happened I initially was kind of shocked (family) attorneys didn't have this level of protection. And made it kind of a little mini mission to do the right thing.” Sann said. “Having a law named after her is a nice memory to capture her spirit a little bit."

A spirit Sann remembered full of so much life. However, in her decade working as a children's lawyer there are also the memories of the times Quirt Sann, like so many other family lawyers, faced threats.

“And I did not realize as a lay person, outside of this, what type of threats were going on with this particular type of attorneys in family law when they're trying to protect kids as well as spouses,” Schofield state Rep. Patrick Snyder, a bill sponsor, said.

“I think this law is good. And I think this is the right law to really make a difference,” bill sponsor state Sen. Jerry Petrowski, R-Marathon, said. “It goes way beyond this. Because I think other states are going to adopt the same type of language.”

“I think what Sarah would be most proud of today is the change came without yelling. Without fighting. Without slander,” Sann said. “I'm just going to keep showing up. And do the right thing.”

Sara's Law is the first of its kind law in the US. A national expert says Sara's Law could provide a case study for the entire county.