Gov. Walker signs bill banning abortion at or after 20 weeks 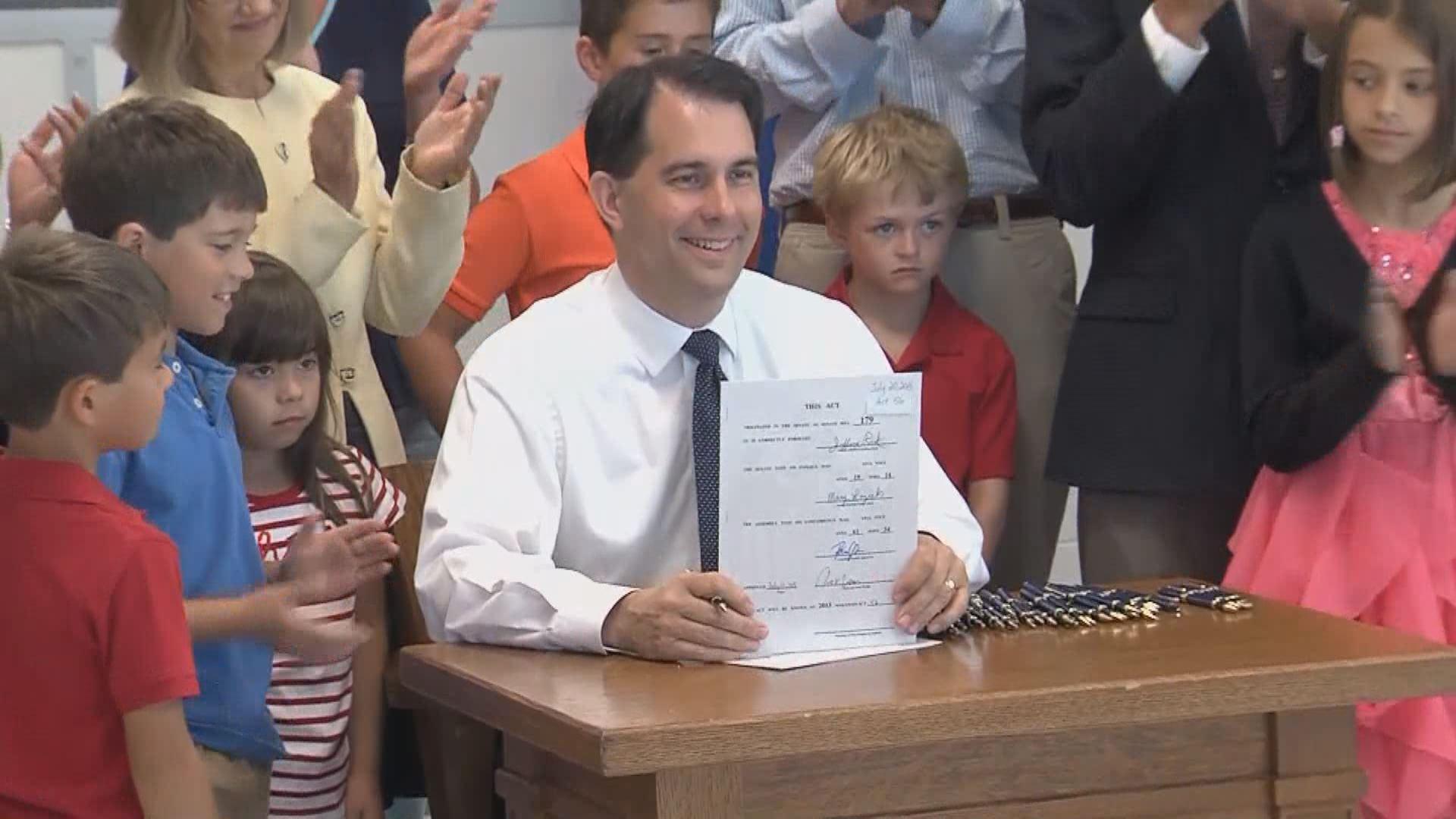 Surrounded by children and their families Monday in Oshkosh, Governor Scott Walker signed off on a bill making Wisconsin the 13th state to ban abortion after 20 weeks.

Once this law is enforced; doctors in Wisconsin could face a felony conviction, prison time, and up to a $10,000 fine if they perform an abortion at 20 weeks or later. It’s a move Republican legislators say will prevent pain in unborn children.

Walker said, \"So many medical experts make the point that an unborn child, baby at that point, can feel pain.\"

Mike Murray, policy director at the Wisconsin Alliance for Women's Health, said, \"Every single mainstream medical organization in Wisconsin has stated evidence does not support the assertion that fetuses at 20 weeks feel pain.\"

That includes the Wisconsin Medical Society, that’s a group which says it's the state's largest organization representing doctors. The group says unborn children can't feel pain any earlier than 24 weeks.

Walker said Monday, \"I think for people regardless of where they might stand, when an unborn child can feel pain I think most people would feel that's appropriate to protect that child.\"

In 2013 abortions at or after 20 weeks made up about one percent of total abortions performed in the state. Those who oppose the newly signed law banning them say these types of abortions came in extreme cases after birth defects were found, or when doctors found issues where a mother's life could be in danger. So opponents say this law limits options.

Murray said, \"I think it's dangerous both for women in Wisconsin who find themselves in the situation. It does not adequately address their healthcare needs, and I also think it's a very dangerous intrusion into the practice of medicine in Wisconsin.\"

Bill co-author, Rep. Jesse Kremer (R-Kewaskum), said in a statement, \"It was a great honor to witness SB 179 become law this morning. I am humbled to have been able to work on this important legislation with my colleagues, Senator Mary Lazich (R-New Berlin), Rep. Joan Ballweg (R-Markesan) and Rep. Joe Sanfelippo (R-West Allis). I would also like to thank all my Senate and Assembly colleagues as well for standing up for Wisconsin’s unborn children who can feel pain.\"

Nicole Safar, Planned Parenthood of Wisconsin's government relations director, also released a statement Monday. She said, “Gov. Walker signing this abortion ban into law today comes as no surprise. He called for the bill back in March and has been using it as a political issue as he runs for president. It’s shameful that Gov. Walker ignored the massive opposition to this bill and disregarded hundreds of contacts from physicians urging him to stop this abortion ban from becoming law. These are extremely complex medical decisions that should be made by a woman, her family and her doctor — not by politicians. This law shows there are no winners in Scott Walker’s race t the bottom on women’s health.”