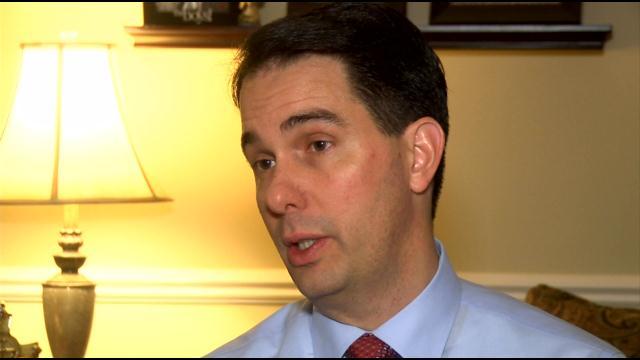 Christmas decorations are still up outside the governor's mansion, but Gov. Scott Walker is looking ahead toward the new year.

"My hope is in the next term, we can help more people live their piece of the American Dream, no matter where they're from," said Walker.

As Walker begins his next term, he says jobs will still be a priority, but did not set the lofty goal of bringing 250,000 jobs to Wisconsin as he did 4-years ago.  Instead, Walker says he will shift the focus from job creation to job training.  Walker emphasized despite criticism, Wisconsin's unemployment rate dropped from 9.2% in 2010, to 5.2% in 2014.

"There are many, many jobs that need to be filled," said Walker, "and there are people right now who are looking for a job, or a better job, who doesn't always have the skill set needed to fill that."

Looking forward to 2015, the Governor will need to make a decision on bringing a new casino to Kenosha.  With a February deadline, Walker says he will take his time, and hopes the tribes involved can come together.

"It's a combination of being concerned about those jobs," said Walker, "but right now I think the number one concern we have is that 100-million dollar hole, unless there was some sort of an agreement."

Rumors are also looming about Walker entering the presidential race.

"My prospects are only as good as the work I'm doing for this state," said Walker, "and so as the state continues to get better, so will my prospects."

Walker also offered his thoughts on Jeb Bush as a potential candidate.

"Jeb's a friend of mine," said Walker, "I like the work he did when he was in Florida, but in the end whether he's officially a candidate or not will have no impact on what decision I might make in the future."

Walker says for now-- he plans to complete his four year term, but also plans to take another hard look at a presidential run, in the next few months.