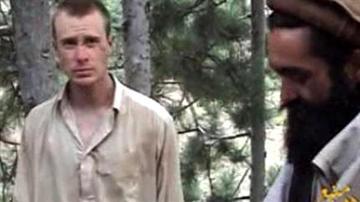 Many criticized the exchange as a negotiation with terrorists, warning that it would set a dangerous precedent. Others said the U.S. risked putting dangerous enemy fighters back on the battlefield by releasing the Guantanamo detainees. Some complained that President Obama might have even broken the law by releasing the detainees without consulting Congress.

Several key administration officials pushed back, though, saying that for all the complications, it would be a terrible mistake to leave an American prisoner of war in enemy hands if they had a real chance to bring him home.

\"America has maintained a prohibition on negotiating with terrorists for good reason,\" said Rep. Buck McKeon, R-Calif., and Sen. James Inhofe, R-Okla., the top Republicans on the armed services committees in their respective chambers. In a statement on Saturday, the lawmakers said terrorists now have a \"strong incentive\" to capture American soldiers and warned: \"That incentive will put our forces in Afghanistan and around the world at even greater risk.\"

House Intelligence Committee Chairman Mike Rogers, R-Mich., told CNN on Sunday that the exchange \"set a price\" on the heads of U.S. soldiers. \"If you negotiate here, you've sent a message to every al Qaeda group in the world -- by the way, some who are holding U.S. hostages today -- that there is some value now in that hostage in a way that they didn't have before,\" he said. \"That is dangerous.\"

\"U.S. policy has changed,\" Sen. Ted Cruz, R-Texas, told ABC. \"Now we make deals with terrorists. And the question going forward is, have we just put a price on other U.S. soldiers?\"

Cruz suggested he would have deployed military force to secure Bergdahl's freedom. \"That's why we sent our soldiers there,\" he explained. \"And the idea that we're now making trades, what does that do for every single soldier stationed abroad?\"

Others worried that the Guantanamo detainees released might renew their fight against Americans abroad. \"I think the big issue here is what's going to happen to these five individuals,\" said Sen. John McCain, R-Ariz., on \"Face the Nation.\" \"If they reenter the fight, then it is going to put American lives at risk.”

McCain called the five detainees swapped for Bergdahl the \"toughest of the tough\" among enemy combatants, and he said the U.S. needs more information about where the five men will be held and how they will be monitored now that they've left Guantanamo Bay.

Gen. Michael Hayden, the former director of the CIA, told \"Face the Nation\" that there is a \"definite risk\" in allowing the five men to go free.

\"They're very dangerous people,\" he said. \"There's a reason they were still at Guantanamo. I would've been a strong voice of caution at the table if I were still in government during this discussion.\"

McKeon and Inhofe also raised a legal objection in their statement, saying the president violated the law by failing to give Congress thirty days' notification of a detainee transfer from Guantanamo. \"Our joy at Sergeant Berghdal's release is tempered by the fact that President Obama chose to ignore the law, not to mention sound policy, to achieve it,\" they said.

Previous proposals to transfer detainees from Guantanamo or close the U.S. facility altogether have drawn fiery opposition from Republicans and defense hawks who believe the facility has successfully kept dangerous terrorists behind bars.

The administration and its allies in Congress, for their part, pushed Republican critiques to the margin and tried to distill the situation to its bare essentials: An American soldier was being held in captivity, they argued, and the U.S. simply could not pass on an opportunity to bring him home.

\"As the war is winding down, it was our sacred obligation, given the opportunity to get him back, that we do so,\" National Security Adviser Susan Rice told CNN. \"And we did so in a way that has brought him back safely into American hands. We did so in a way that resulted in the Taliban prisoners being monitored and kept in a secure way in Qatar.\"

\"Time was not something we could play with,\" she continued. \"We needed to act when we had the opportunity.\"

Rice added on ABC that the U.S. acted in haste because of concerns about Bergdahl's health. \"We had reason to be concerned that this was an urgent and an acute situation, that his life could have been at risk. We did not have 30 days to wait,\" she explained. \"Had we waited and lost him, I don't think anybody would have forgiven the United States government.\"

On NBC, Defense Secretary Chuck Hagel seconded Rice's concerns about the sergeant's health. \"This was essentially to save the life of Sergeant Bergdahl. We had information that his health could be deteriorating rapidly. There was question about his safety. We found an opportunity. We took that opportunity,\" he said. \"I'll stand by that decision.\"

In a statement on Saturday, Hagel also emphasized the \"security measures\" the U.S. had negotiated with the government of Qatar, which is holding the former Guantanamo detainees for at least a year while they await another transfer. He stressed that the \"national security of the United States will not be compromised. \"

Sen. Claire McCaskill, D-Mo., brushed aside concerns about negotiating with terrorists, saying it's simply a natural consequence of a war waged against an ideology, rather than against another country.

\"This was not a hostage. This was a prisoner of war. It is much different when you're negotiating with the enemy over prisoners of war. We have done prisoner swaps many times in our history,\" she explained on \"Fox News Sunday.\" \"Unfortunately, this is our enemy now...We don't have nation states as enemies. We have, in fact, terrorist organizations as enemies. And this was a prisoner of war.\"

And several administration officials even voiced hopes that the brief engagement with the Taliban regarding the Guantanamo detainees could snowball into a more comprehensive dialogue that could help secure Afghanistan after U.S. forces leave.

The U.S. was holding talks with the Talibanduring Mr. Obama's first term, but those negotiations fell apart in 2012.

\"\"We've had no relationship since then,\" Hagel told NBC on Sunday. \"So maybe this will be a new opening that can produce an agreement.\"

And President Obama himself held out the possibility of a more comprehensive dialogue with the Taliban in a statement celebrating Bergdahl's return.

\"While we are mindful of the challenges, it is our hope Sergeant Bergdahl's recovery could potentially open the door for broader discussions among Afghans about the future of their country by building confidence that it is possible for all sides to find common ground,\" the president said on Saturday.