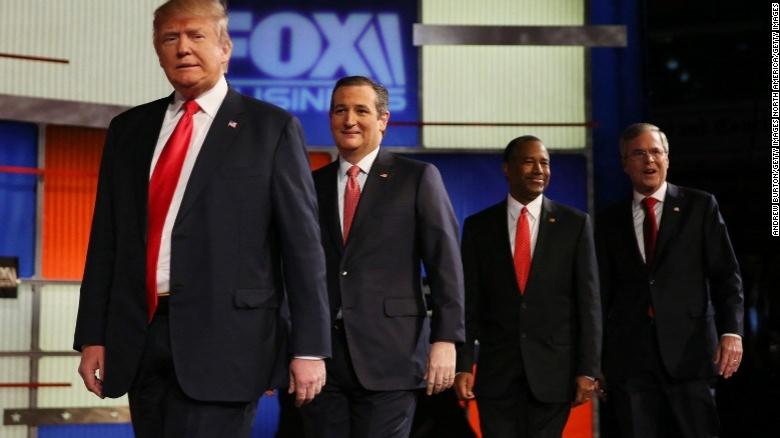 Washington (CNN)Donald Trump and Ted Cruz had their first fist-fight of the 2016 campaign during Thursday night's Republican debate.

And they both won.

But they weren't the only victors in a night that revealed the top seven GOP presidential contenders' strengths and weaknesses just over two weeks before voters cast the first ballots in the Iowa caucuses.

Here's our take on the winners and losers that made for a rowdy night in South Carolina.

Donald Trump gave his best debate performance of the campaign.

Standing center-stage, the front-runner towered over the field with unrelenting verbal volleys at the top contenders -- at least the few who dared to take him on, their fear just another sign of his dominance.

Trump's strongest moments came as he and Texas Sen. Ted Cruz had their most public and direct fight of the campaign.

The real estate developer effectively planted the idea in voters' minds that Cruz's Canadian birthplace could be a liability should Democrats challenge the Texas senator's eligibility to run for president.

Trump also steamrolled Cruz over the latter's attack on his "New York values."

"When the World Trade Center came down, I saw something that no place on Earth could have handled more beautifully, more humanely than New York," Trump said to applause.Ted Cruz

Building on his recent surge in the polls, Cruz elevated himself as he went toe to toe with The Donald -- indicating a two-man race might be in the offing.

Cruz got the most screen time in two separate bouts with the billionaire.

The Texas senator sought to dismiss Trump's questions about his "natural-born" status as ridiculous by introducing questions about Trump's own eligibility given the billionaire's Scottish-born mother. And he pointed out that he, a lawyer who's argued constitutional cases before the Supreme Court, would not be taking any legal advice from Trump, who has no legal training.

And then he added some levity when he suggested Trump could be his VP, and jump to the head of the ticket if he is ruled ineligible.

Despite Trump's strong defense of his New York background, Cruz's references to issues such as abortion, guns and gay marriage could win him support from conservatives in Iowa.

"I think most people know exactly what New York values are," Cruz said.

Christie delivered the strongest debate performance of the establishment candidates as he touted his record as a governor and let his no-nonsense New Jersey spirit shine.

A one-liner against Rubio is sure to get some play.

"You already had your chance, Marco. You blew it," Christie told Rubio as the Florida senator tried to interject.

It's notable that Christie's best moments came as he battled Rubio, as the two have been sparring for support in New Hampshire where Christie is on the rise.Nikki Haley

When even the candidate you criticized on national television talks you up as a "friend," you know you've got influence.

After obliquely knocking Trump in her delivery of the GOP response to the State of the Union Tuesday, South Carolina Gov. Nikki Haley earned the businessman's praise on the stage Thursday night.

Haley, the popular South Carolina governor praised by both establishment and tea party figures, basked in goodwill from those on the stage -- likely pining for her powerful South Carolina endorsement.

As a woman and a minority, the Indian-American governor is considered a top vice presidential pick as the party gears up for what it believes will be a battle against Democrat Hillary Clinton. Trump, though, dismissed her VP prospects on CNN after her speech.Losers

Ben Carson looks like he's still trying to figure out his place at the table.

Facing a campaign in turmoil and slippage in the polls, the retired neurosurgeon didn't do anything Thursday night to stand out from the pack.

And he didn't make good use of his time. As he took his first question, he chose to start by complaining about the time it took the moderators to give him a turn rather than simply make his case to the public.

Arguments for why he'd be a better president than the rest, however? Sorely missing.John Kasich

Ohio Gov. John Kasich was also present at the debate.

The Republican candidates took several swipes at a favorite conservative punching bag -- The New York Times -- and tried to turn recent negative reports to their advantage.

"If that's the best hit the New York Times has got, they better go back to the well," Cruz said in dismissing an article raising questions about his adherence to campaign finance regulations.

"It's the New York Times. They're always wrong," Trump stated in rejecting a piece that said he called for a 45% tariff on China.

The senator from Florida started off strong with a slap-down of Hillary Clinton that also served to one-up his former mentor, Jeb Bush, and delivered a strong finish when he slammed Cruz as a flip-flopper. In fact, his attack was so cutting that it almost elevated him into the list of winners.

But despite his strong moments, Rubio was mostly out of view amidst the Trump and Cruz back-and forths.

He popped in with a zinger at one point, disparaging the Trump-Cruz feud as an "episode of Court TV" but did little more to seize the spotlight.

Unlike in past debates, Rubio didn't stand out -- and he let Christie get the better of him in some key spots -- a major lost opportunity as the two duel in the first-in-the-nation primary state of New Hampshire.Jeb Bush

The former Florida governor was clear and concise in his delivery -- something that escaped Bush in the campaign's early debates -- but his adult-in-the-room persona often seemed starkly at odds with the direction of the primary conversation.

In response to Trump's proposal to ban Muslims from the U.S., Bush insisted, "This policy is a policy that makes it impossible to build the coalition necessary to hit ISIS."

Trump pushed back with a simple, straight-to-the-heart message that seemed to resonate with the audience: "I want security for this country. I want security. I'm tired of seeing what's going on."

While Bush might have won on policy points, his appealing-to-the-head campaign is showing no signs of racking up a victory.