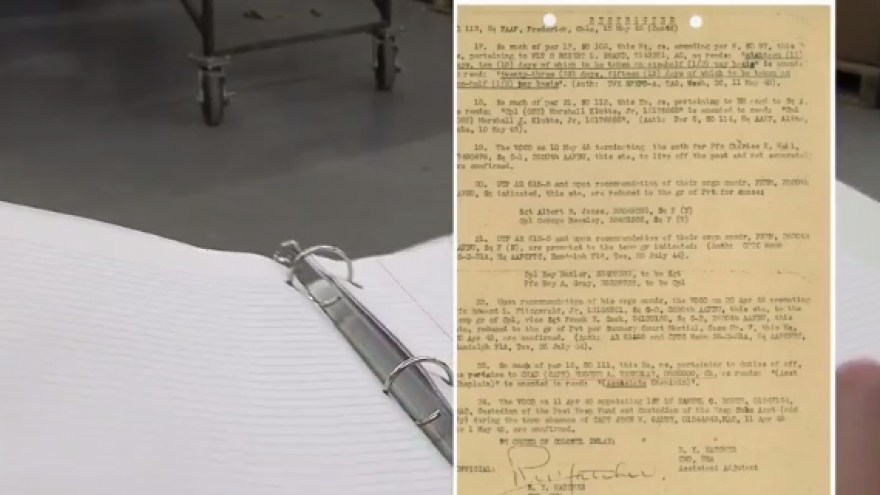 Appleton - (WFRV) Lataya Williams works on the gauntlet where she sorts through the donations that come into Goodwill in Appleton, she has the responsibility of deciding what needs to be recycled and what needs to be saved.

Luckily her attention to detail came through when she found a binder that told the life story of LT. Col. Eugene Tremblay starting with his birth certificate and going through his 24 years of serving in the Air Force as a Chaplain.

Williams knew she found something special so she showed it to Norman Parrotte a Navy veteran who runs the carts from the back storeroom out to the Goodwill Outlet front area.

"A vet shouldn't just get thrown into the garbage so we brought it over to Big D," said Parrotte.

Dennis Zemialkowski the Goodwill NCW leader of logistics who is also an Air Force veteran took the initiative to contact the Air Force Museum in Ohio after browsing through some of the documents.

Those documents showed that Tremblay began his service in 1943 before the Air Force was created in 1947, his tours took him all over the world and Tremblay received a purple heart during his service.

The Air Force Museum wrote back a letter thanking the team at Goodwill for handing over this piece of history that might have been lost if it weren't for the diligence of the employees.

Records showed that Tremblay was born in Chippewa Falls in 1905, Goodwill believes that they acquired the binder after Tremblay passed away, because he didn't have any next of kin.