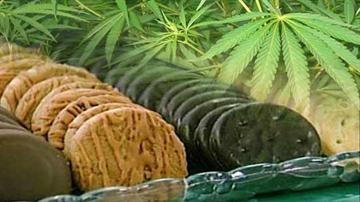 (CBS NEWS)--Aside from selling long-time fan favorites such as Thin Mints and Samoas, the Girl Scouts' cookie program has another goal: To teach girls and young women to become savvy business thinkers.

One 13-year-old Girl Scout is exemplifying that mission with her clever selling strategy: Pitching her cookie stand outside a medical marijuana dispensary.

The girl, Danielle Lei, set up the stand outside The Green Cross medical marijuana dispensary in San Francisco, stocking her table with favorites such as Tagalongs and Samoas. She sold about 117 boxes in two hours.

Lei's mother told CBS station KPIX by phone that the location allowed her to talk to her daughter about the sensitive topic of drugs. Lei's local council, the Girl Scouts of Northern California, said in a statement that it issues safety guidelines, but does not dictate where sales can be held.

\"We respect that individual sales and booth decisions will vary for different families and within the context of their communities,\" the council said. \"The decision of the mom to allow her daughter to have a booth at this location is not intended to be an endorsement or statement of any kind.\"

Lei's strong sales demonstrate her savvy in picking the creative location, especially given that the Girl Scouts of Northern California this year raised its cookie price this year to $5 a box, making it the most expensive Girl Scout cookies within mainland U.S.A.

What better way to demonstrate \"out of the box\" business thinking than targeting a location that's guaranteed to churn out people with the munchies?

As a co-leader of a Girl Scout troop, I've witnessed my scouts set sales goals, learn how to count change, meet and exceed their sales goals and deadlines, and then decide how they'll use their troop funds.

It's the type of experience that they're not likely to find elsewhere. While other educational groups have fund-raising sales, one key aspect of the Girl Scout cookie sale is that the girls then work as a group to decide how to use the money, which includes a philanthropy portion. Our scouts have opted to donate a chunk of their funds to a local animal shelter and a homeless charity, for instance.

The reaction to Lei's pot-dispensary stand has been overwhelmingly positive, with people on Twitter cheering her on for her strategy.

Still, some are less than enamored with the idea. The Girl Scouts of Colorado, another council, wrote in a tweet, \"If you are wondering, we don't allow our Girl Scouts to sell cookies in front of marijuana shops or liquor stores/bars.\"

The attention Lei has received is likely to boost her sales this weekend. She'll be back on Saturday, Feb. 22 from 4 to 6 p.m., Mashable notes.