Girl, 3, missing after dad made her stand outside at 3 a.m. for not drinking milk 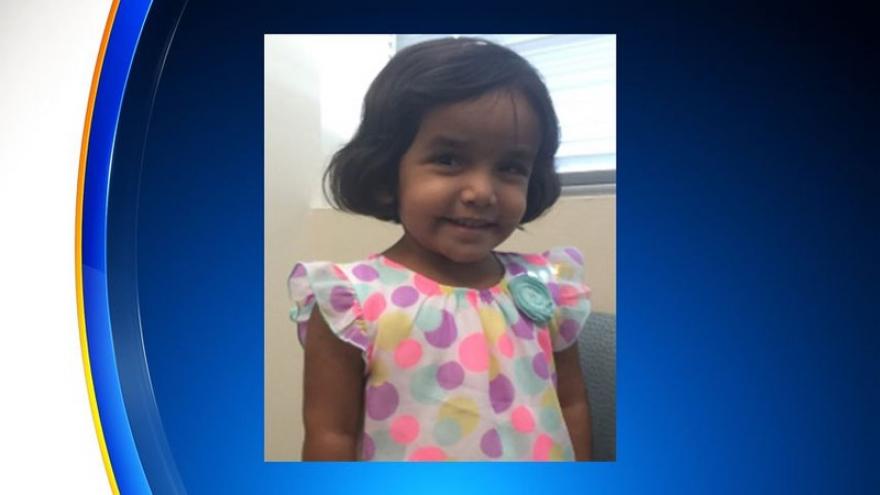 RICHARDSON (CBSDFW.COM) – A three-year-old Richardson girl is still missing and police believe her disappearance may have started when her father tried to punish her.

As it stands, city, county and state law enforcement are all working with the FBI to try and find little Sherin Mathews.

By Monday morning the streets around the 900 block of Sunningdale were plastered with fliers asking for help finding the missing child. Worried neighbors say their once quiet street has been turned upside as investigators work to find the toddler.

Accoring to Texas Child Protective Services (CPS) spokeswoman Marissa Gonzales, the family has had contact with CPS previously, but by law she could not give details about the incident/incidents. Sherin’s 4-year-old sister was removed from the home Monday morning and placed in foster care. Gonzales said CPS is also, “working with law enforcement on the investigation into this little girl’s disappearance.”

An Amber Alert was issued after the toddler went missing early Saturday morning. Now police say the girl’s disappearance may have started as a disciplinary action for not drinking her milk.

The child’s father, Wesley Mathews, said he last saw Sherin at 3 a.m. in the family’s backyard when he told her to stand by a tree across am alleyway as punishment. According to an arrest affidavit, Mathews said it was about 15 minutes later when he went back to the spot where he directed his daughter to stay and saw that she was gone.

Mathews, who didn’t report his daughter missing until 8 a.m., was arrested and charged with abandoning or endangering a child. An Amber Alert was issued Saturday afternoon.

In addition to allegedly leaving the little girl outside Mathews reportedly told investigators that he “knew coyotes had been seen in the alley where he left his daughter.”

On Saturday police towed the family’s van and two SUV’s and officers flooded the neighborhood over the weekend asking neighbors for surveillance video.

Sherin stands approximately 36″ tall and weighs about 22 pounds. She was last seen wearing black leggings, a pink long-sleeve shirt and pink flip-flops. Investigators say the little girl “suffers from developmental issues and has limited verbal communication skills.” Police are asking anyone with information on her whereabouts to call 972-744-4800.

Wesley Mathews was being held in the Richardson Jail, but posted a $250,000 bond and has been released.