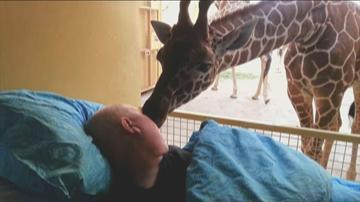 (CBS NEWS)--A giraffe might have paid tribute to a dying zoo employee with a nuzzle that was captured on camera Wednesday and has now gone viral.

The Dutch Ambulance Wish Foundation charity released a photo March 20 that shows a giraffe in an embrace with Mario, a zoo employee who had been working at Diergaarde Blijdorp Zoo in Rotterdam for the past 25 years. According to the foundation, the intellectually-disabled man had a brain tumor that's left him paralyzed, and his wish was to return to the zoo to see his animals and colleagues.

\"It was a very special moment. You saw him smile,\" the foundation's director Kees Veldboer told the newspaper Algemeen Dagblad, as reported by English-language Dutch News. \"It was special that the animals knew him and could sense all was not well with him.\"

The charity transports terminal patients via ambulance to carry out their last wish.