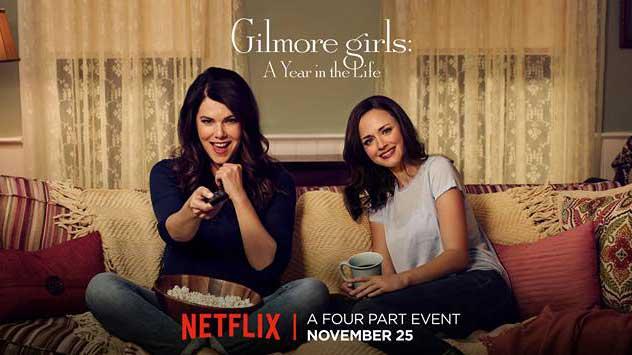 (CBS NEWS) It has been a decade since the “The Gilmore Girls” TV series ended, but that doesn’t mean show-related merchandise is hard to get. And now that Netflix (NFLX) is reviving the series on November 25, business is really booming for “The Gilmore Girls” fans who sell merchandise they create in tribute to the quirky comedy about three generations of women in a Connecticut family.

Etsy (ETSY) shows more than 1,000 items related to the show. Amazon (AMZN) and eBay (EBAY) also have plenty of Gilmore stuff for sale. Fans who want a steady supply of Gilmore merchandise can subscribe to Lit Cube, which provides customers three to five “Gilmore Girls-inspired goodies” such as T-shirts, home décor, and bath-and-body items every month.

The town of Washington Depot, Connecticut, which served as the inspiration for “Gilmore Girls’” fictional setting of Stars Hallow attracted more than 1,000 fanswho reportedly shelled out $200 per ticket for a Gilmore festival in October.

The show’s enduring appeal is surprising for many reasons. First, during its original run from 2000-2007,  “Gilmore Girls” was often overshadowed in the ratings by shows like “Friends.” It was also on smaller networks such as the WB and later the CW, which is owned by CBS (CBS), parent of CBS MoneyWatch.

“It was one of those shows that created a world that people enjoyed being in,” said Robert Thompson, director of the Bleier Center for Television & Popular Culture at Syracuse University. “The characters were interesting and compelling. You cared about them.”

Indeed, the main characters, Lorelei Gilmore (Lauren Graham), her daughter Rory (Alexis Bledel) and her mother Emily (Kelly Bishop) spoke in machine-gun like bursts of dialogue that were chock full of pop culture references that fans -- and even the cast -- didn’t always get. Bishop told CBS MoneyWatch she often had to ask Graham about bits of dialogue she didn’t understand.

“Everybody is talking faster now,” she said. It was an “a direct result of the computer age.”

Bishop, who avoids the limelight, was surprised by the volume of Gilmore merchandise that’s for sale and delighted that fans were selling stuff carrying the slogan “Emily Gilmore for President.”

“l always said that Emily Gilmore’s ideals were Nancy Regan and Jackie Kennedy, so it makes sense that she might want to move in that direction,” said Bishop, who is far more down to earth than her imperious character.

Of course, the companies with the most riding on the success of the “Gilmore Girls” revival are Netflix and Time Warner’s (TWX) Warner Bros. studio, which is producing the series. The resurrection isn’t going to be cheap. According to Variety, Graham and Bledel are each receiving $750,000 per episode. And the track record for rebooting shows that have gone off the air is mixed.

Even so, fans like Lucy Harnish, a stay-at-home mom from Michigan with a side business making Gilmore-themed mugs, are ready for the new shows. “I am very excited about the revival,” said Harnish, whose Gilmore sales have jumped in recent months from two to four items per day to 10.

Cast members are also riding the wave of fan interest. Graham’s memoir “Talking as Fast as I Can” comes out on Nov. 29,  four days after Netflix is due to release all four episodes of “Gilmore Girls: A Year In the Life.” Scott Patterson, who plays Lorelei’s on-again, off-again love interest Luke Danes, has been promoting his music career on social media to Gilmore fans. His band SMITHRADIO is set to release its debut single on Nov. 23.

The Gilmore hoopla inspired fan Kristi Carlson to write a cookbook called “Eat Like a Gilmore: The Unofficial Cookbook for Fans of The Gilmore Girls.” It’s something this self-described “grandma-taught cook” had never done before. Carlson said she wasn’t sure if fans would be interested in the book, so she did a Kickstarter campaign and was “blown away’ by the positive response she got.

Warner Bros. declined to let Carlson use any copyrighted material from the show, a position she said she understands. A spokesman for Warner Bros. didn’t respond to requests for comment for this story. Neither did Netflix.

The media company may regret its decision. “Eat Like a Gilmore” is now 13th on Amazon’s list of best-selling cookbooks. Ironically, the show’s main characters never cook.

“While they don’t cook, they certainly do eat constantly,” said Carlson. “It’s all about meals and dinners. Food is definitely, ever-present in the show.”

And fans are making sure show-related merchandise is ever-available.