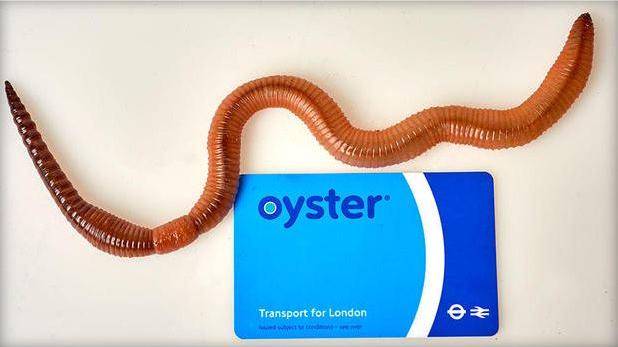 (CBSNews) Imagine being in your garden and stumbling on an enormous earthworm that measures about as long as a standard bowling pin is tall, and that weighs about the same as a small chocolate bar. The encounter, while likely startling, ended up being a record-setting encounter for a man in the United Kingdom, after he came across what has now been crowned the earthworm that is not only the longest ever found in the U.K., but also the heaviest known wild worm in the world.

The earthworm was named Dave by the stepson of the man who discovered it. It was then sent to the Natural History Museum in London for evaluation, where museum experts determined that Dave is a lob worm, Lumbricus terrestris.

Emma Sherlock, senior curator of free-living worms at the Natural History Museum and chair of the Earthworm Society of Britain, said that Dave’s size is astounding.

“I was bowled over by the size of this worm when I opened the plastic box they sent it in,” Sherlock said in a statement. “Not only is it really long, it is almost twice as heavy as any other wild earthworm ever seen, weighing the same as a small chocolate bar.”

Dave’s size is particularly impressive for a worm in the wild, according to experts. With plenty of natural predators and other threats, the Natural History Museum noted that earthworms don’t typically survive long enough in the wild to reach such a record size. Sherlock said that the vegetable plot in which Dave was found must have been “incredibly fertile and well-drained.”

Earthworms play a key role in keeping soils healthy. According to Earthworm Watch — a survey of earthworms and soil quality that is run by the museum and the Earthwatch Institute, in association with the Earthworm Society of Britain — earthworms improve soil fertility and the ability for soil to store carbon by mixing in dead plant material.

As part of continued research into earthworms, the museum routinely monitors worms, identifying them and releasing them back into the wild. However, a few are kept at the museum as a record of the population, especially if they are particularly unusual.

Given Dave’s significant size, the worm was anesthetized by museum scientists to be preserved, the institution said. Dave will now join a scientific collection of 80 million specimens at the Natural History Museum.

“This may seem sad, but by being part of the scientific collection this earthworm will have a legacy that lasts beyond all of our lifetimes, helping scientists today and tomorrow to understand and protect this species and its environment,” Sherlock said.