Giant asteroid makes its closest approach to Earth in centuries 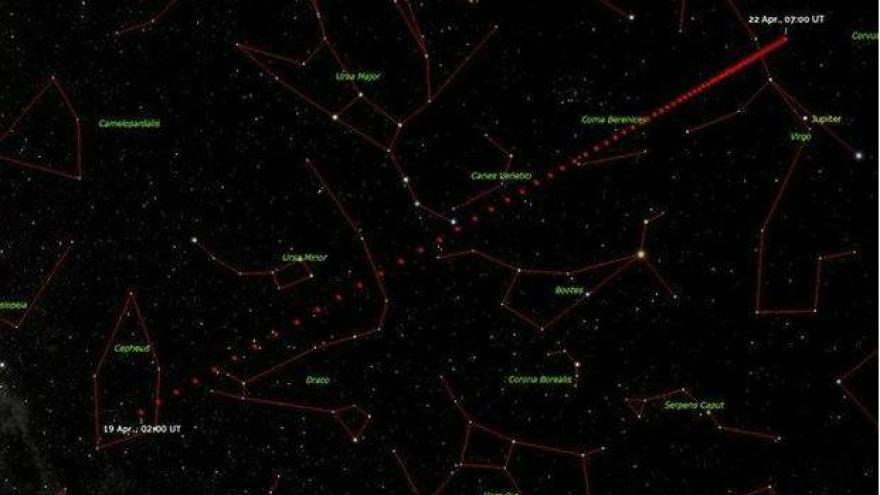 (CBS NEWS) A huge, shiny, peanut-shaped asteroid reportedly swung safely by Earth Wednesday morning, coming within a distance of 1.1 million miles of the planet — about 4.6 times the distance from Earth to the moon.

The bright asteroid 2014 JO25 came towards Earth from the sun’s direction, and should remain visible in the sky in small telescopes for a few more days as it fades from view. The asteroid was expected to be at its closest point to Earth at 8:24 a.m. EDT. You can see a video animation of the asteroid’s orbit here.

Asteroid 2014 JO25 was first spotted in May 2014 by astronomers at the Catalina Sky Survey in Arizona, and measurements from NASA’s NEOWISE mission suggested it was about 2,000 feet across, according to NASA’s Jet Propulsion Laboratory (JPL). Radar observations from the Arecibo Observatory in Puerto Rico suggest it could be as big as 4,270 feet at its widest point.

The asteroid’s surface reflects about twice as much light as the moon. Its approach marks the closest an object this large has come to Earth since the gigantic asteroid 4179 Toutatis tumbled by in 2004, within four times the distance from the Earth to the moon.

Wednesday’s approach is the closest 2014 JO25 has come in at least 400 years, and there’s no known close approach coming through at least the year 2500. Although the asteroid’s approach poses no risk to Earth — with a 0 percent impact probability — the International Astronomical Union’s Minor Planet Center still classified it as “potentially hazardous” because of its size and nearness to Earth. Researchers will have to keep an eye on it to see if it drifts closer over the centuries, the Minor Planet Center wrote.

Astronomers around the world will continue to study asteroid 2014 JO25, including skywatchers at Arecibo and NASA’s Goldstone Solar System Radar in California, JPL officials said in the statement — making observations that can potentially reveal features just a few meters across.

“Using radar, we can illuminate a near-Earth asteroid and directly measure its features,”astronomer Edgard Rivera-Valentín, a planetary scientist with the Universities Space Research Association (USRA) at the Arecibo Observatory, said in a separate statement. That’s how scientists pinned down the asteroid’s peanut shape, he added.

The next close approach of a known giant asteroid will happen in 2027, when the half-mile-wide asteroid 1999 AN10 passes by at about the distance from the Earth to the moon.