Giannis offered 'free food for life' by Culver's of Shorewood 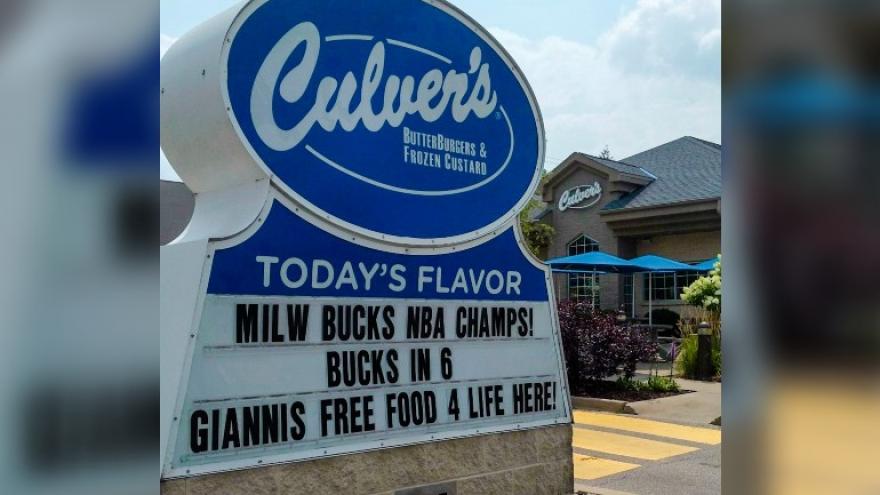 MILWAUKEE (CBS 58) -- The local race to offer NBA Finals MVP Giannis Antetokounmpo free food for life is heating up after a Culver's location in the Milwaukee-area offered the Greek Freak unlimited meals for the rest of his life in a tweet Friday, June 23.

In a Instagram live that went viral on Wednesday, June 21, the two-time MVP stated that he'd like free Chick-fil-A for life now that he has brought an NBA title to the Bucks for the first time in 50 years.

Giannis proceeded to order 50 Chick-n-Minis, one for each point he scored in the championship-clinching Game 6.

According to audio from the Instagram live video, the Chick-fil-A location Antetokounmpo visited was initially unsure if they could offer the NBA Champion free food for life and did not appear to offer him any lifetime deal in the video.

However, a different chain seems to be stepping in to the fray to potentially fulfill Antetokounmpo's request of lifetime food in return for his NBA Championship title.

In a tweet reply Friday to a Giannis tweet following up his earlier request for Chick-fil-A for life, the official Culver's Twitter account replied that their Shorewood location would be "honored" to offer Giannis free food for life.

The tweet went on to say that the Greek Freak's "loyalty to our home state is inspiring."

Since the Twitter post, the Culver's of Shorewood location has added their offer to their restaurant signage board outside their location at 1325 E Capitol Drive.

We will have to see if Antetokounmpo is willing to replace Chick-fil-A's Chick-Minis with a ButterBurger and shake but the offer sure sounds delicious.

Keep your eyes open for any 6'11'' power forwards on your next visit to Culver's of Shorewood, it just might be the NBA Champion Giannis Antetokounmpo.