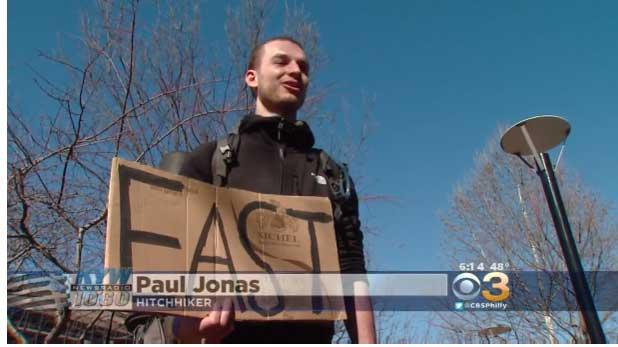 PHILADELPHIA (CBS Philadelphia) —  A German man is one day away from hitchhiking from Vancouver to New York in 32 day and he did it without using any money, according to CBS Philadelphia.

Instead he depended on the kindness of strangers.

He started off in Vancouver where he was studying, made his way west to San Francisco and then all the way across the U.S. His final destination is New York City.  Jonas wanted to prove that it can be done with no money and by the generosity of strangers who offered transportation, lodging and meals along the way.

“I am really impressed about all Americans. Like people are very kind to me. I get invited for a rump steak or Thai food like from Pat and Jesse in Denver and people are very nice to me. I’m very impressed by the kindness of people,” Jonas told Eyewitness News.

In Chicago, he visited the Planetarium and instead of hitchhiking he took a train and bus.

Jonas says he knew he had to trust people to make the project work. He wraps up in New York City with a free place to stay, on a yacht along the Hudson River.