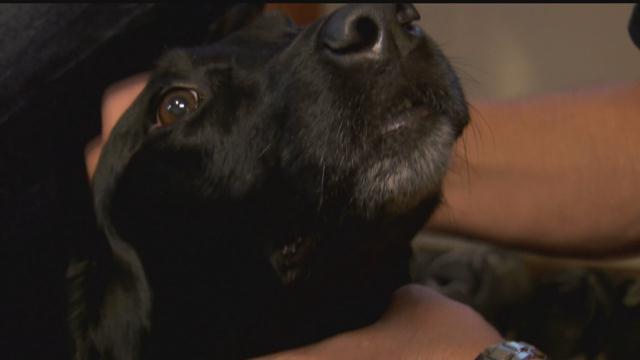 The bond between a local marine and his partner is unbreakable.

\"I love her more than anything in the world,\" said Cody Crangle. \"We went to hell together and came back from hell together.\"

They've risked their lives for the red, white and blue, serving seven months in Afghanistan. Crangle as an dog handler and four-legged Flo detecting IEDs.

\"She would work out in front of the patrol and smell for any of that,\" said Crangle.

But no one was there to save Flo.

\"For half a second she was down and got back up and was limping back to me, and right away I knew something was wrong,\" Crangle said.

A typical game of fetch went wrong and Flo tore her ACL.

\"She's been through everything I've been through, but she doesn't get the same benefits,\" said Crangle.

The surgery cost $4,000, money Crangle was ready to pay for out of pocket. Until Witt, a member of the group War Dogs, stepped in.

\"I had no idea the VA or government didn't have any assistance for these these dogs,\" said Witt. \"I feel it's a dirty shame we don't have that.\"

A former dog handler in Vietnam, Witt is using his expertise to further War Dogs mission to, \"educate the public on how different breeds have been used in the military,\" he said.

But in true comrade fashion, he reached out to save a fellow four-legged veteran.

An area bank paid for Flo's surgery, and as her story spread, donations poured in from across the county.

\"From there, there's been a fund set up that's going to try to help other dogs in the future that have problems who come home and aren't covered,\" said Crangle.

Crangle is grateful for the support, but most all the increased awareness. Aside from a shaved leg and staples, Flo is on the mend following her procedure and is ready to get back to action.

\"No injury will stop her from doing what she loves,\" he said.

Flo will have her staples removed in about a week, then start therapy. To learn more about the War Dogs group and make a donation to the fund, click here.