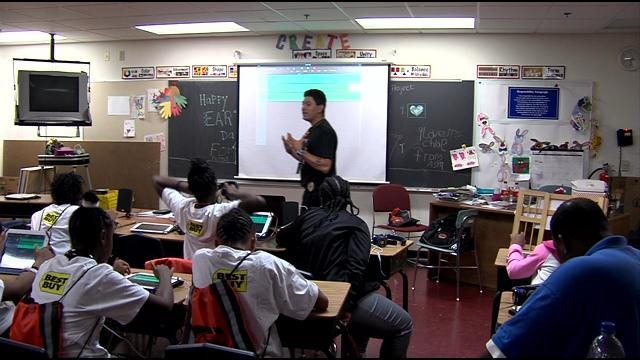 Embrace your inner geek. That's the message at the Daniel Mardak Boys and Girls Club of Greater Milwaukee.

The Best  Buy Geek Academy has set up shop for the next two days here, teaching young people about the latest tricks of the trade.

All in hopes of inspiring future career choices in technology.

\"We'll introduce them to 3-d printing lego robotics and programming. They also make their own songs and digital music and a whole bunch more,\" explained William Woodworth, Project Manager of the Geek Squad Academy.

This isn't just general instruction, thrown out over a course of classes. Experts wander among the video screens and computers to make sure each child is on track. Nobody's allowed to leave for the day without getting it.

\"So we're trying to give them the knowledge to be more of a creator than just a consumer. We think this is where it starts,\" added Woodworth.

The key is being interactive and becoming a master of the equipment.

Yet, it's the personal connection with these experts that seems to have made the biggest impact on the young people.

Amiyah  Jefferson told CBS 58 News that she appreciated the fact that these experts would come to her neighborhood to share what they know.