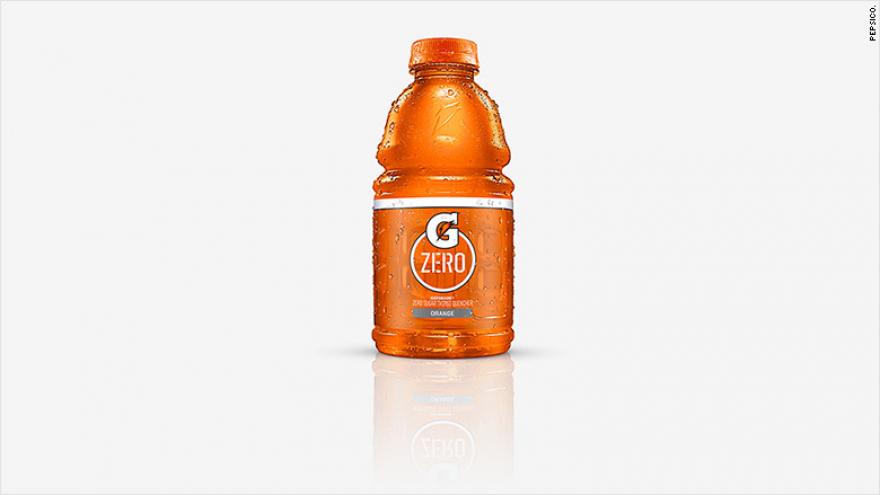 Gatorade Zero, a thirst quencher without sugar or carbs, hit stores around the country this week. It comes in orange, lemon lime, and glacier cherry, and is priced in line with the brand's classic sports drink.

The new drink is a tacit admission that the heyday of sugary sports drinks is winding down.

Gatorade has controlled the nearly $8 billion US sports drink industry for decades, grabbing about 75% of the market, according to research firm Euromonitor International. The brand has been a boon for Pepsi, which has owned Gatorade since 2001.

The drink is a fixture of sports sidelines through sponsorships with pro leagues and endorsement deals for global stars, including Michael Jordan, Serena Williams and Lionel Messi. Gatorade's 1991 "Be Like Mike" commercial helped propel the Jordan craze, while Glacier freeze and fruit punch Gatorade baths have become marks of Super Bowl-winning coaches.

But Gatorade is showing signs of fatigue. Sales ticked down 0.5% last year to $5.9 billion in the United States, according to Euromonitor. The brand lost market share, too.

Although high on electrolytes that help athletes rehydrate as they sweat, a 20-ounce drink has 34 grams of sugar, 36 grams of carbohydrates, and 140 calories. Health-conscious athletes have grown wary of sweeteners and added carbs.

"Athletes have heard ad nauseum about the need to hydrate," said Leslie Bonci, a longtime sports dietitian who is currently a consultant for the NFL's Kansas City Chiefs. "They know electrolytes are important, but they are looking for options."

She said many players are pushing away Gatorade for coconut, sparkling, electrolyte, and flavored waters with natural ingredients and enhanced functional benefits to meet their changing training regimens.

Health shifts and the explosion of new drinks and flavors to compete with big brands on store shelves have reshaped the beverage industry. Carbonated soft drink volume sales have fallen 13 years in a row, according to trade publication Beverage Digest.

"The same trends that emerged within soft drinks in the last decade are revealing themselves in the sports drink market," said Beverage Digest executive editor Duane Stanford. "A growing number of consumers are moderating their sugar intake, and some don't want sugar at all."

Gatorade has responded to the trends by expanding its lineup in recent years to give athletes more choices.

In 2016, it added higher-priced G Organic, which came without artificial coloring and had fewer ingredients and sugar than the traditional version. Last year, it redesigned its G2 low-calorie line to make "lower sugar" stand out on the bottle, Stanford said.

Those changes have not resonated. "We worry that Gatorade's artificial and sugary ingredient profile (plus lack of awareness on low-sugar versions) has caused its brand image to shift toward being less healthy than alternatives," Barclays analyst Lauren Lieberman said in an April research report.

"Gatorade Zero will address the large and growing demand by athletes for additional hydration options," Pepsi CEO Indra Nooyi told analysts in April. "Zero will give our athletes more flexibility."

With the new drink, Gatorade will take on Coca Cola's(KO) Powerade Zero for the first time. Coke launched Powerade Zero a decade ago, and it has been a bright spot in the sports hydration market.

Gatorade Zero could also help the brand fend off BodyArmor, an upstart sports drink that counts Kobe Bryant as a top investor, and markets itself as a "more natural" choice for athletes.

BodyArmor's sales grew 78% in 2016 to $235 million as it entered into more stores with the backing of Dr. Pepper Snapple's (DPS) massive US distribution network.

"They're capitalizing on consumers' desire to try new beverages within well-known categories and also move to natural ingredients and flavors," Stanford said.

BodyArmor is now targeting Gatorade directly. It's running a new ad campaign featuring James Harden and Mike Trout with the tagline, "Thanks, Gatorade. We'll take it from here."

"James Harden wouldn't go to the game wearing outdated fashion," says a narrator in the ads. "So why would he choose an outdated sports drink?"

Pepsi's Nooyi didn't mention BodyArmor on its last earnings call, but she said a "new competitor" had dropped prices and chipped away slightly at Gatorade's market share when it first landed on shelves.

Yet Gatorade is trying to play the long game. It plans to hold prices steady, even if means temporarily sacrificing share. BodyArmor's sales fell off after initially entering new stores and its lower pricing strategy is "not sustainable in the long term," Nooyi claimed.

"Gatorade just has to be very responsible and very careful in its response," she said. "It's got to be surgical, and that's what we are doing. We are watching Gatorade shares like a hawk."