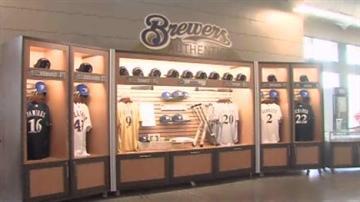 MILLER PARK-The Brewers are making it real easy to have a real piece of the game.

They've set up a game used and \"Authentics\" kiosk on the field concourse.

It's the latest big reveal as the team counts down to the Home Opener on Monday.

Items include game used baseballs for $35 each and autographed jerseys for between $200 and $400.

\"This is one of the most high traffic areas in the ballpark on the field level,\" explained Brewers COO Rick Schlesinger. \"A lot of fans will have a chance to walk by.  It's not exactly an instant purchase but they have a chance to look at it. Maybe they'll come back later in the game or during later games. We'll have plenty of inventory to sell.\"

They also have the empty champagne bottles used to celebrate the Brewers Playoff Clincher in 2011 for $50. Or the corks for $10 each.