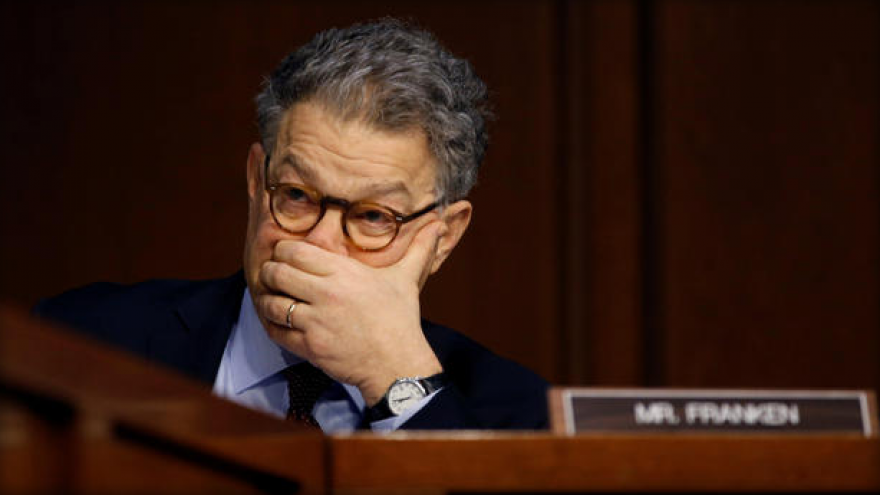 (CBS NEWS) -- Sen. Al Franken, D-Minnesota, issued another statement responding to accusations by anchor Leeann Tweeden that the senator "kissed and groped" her without her consent while they were entertaining troops on a December 2006 USO Tour.

In addition to Tweeden's allegations of unwanted sexual behavior, she revealed a photo of Franken groping her chest while she slept on a flight back to the United States from Afghanistan:

Here is Franken's statement in full:

"The first thing I want to do is apologize: to Leeann, to everyone else who was part of that tour, to everyone who has worked for me, to everyone I represent, and to everyone who counts on me to be an ally and supporter and champion of women.  There's more I want to say, but the first and most important thing -- and if it's the only thing you care to hear, that's fine -- is: I'm sorry.

"I respect women.  I don't respect men who don't.  And the fact that my own actions have given people a good reason to doubt that makes me feel ashamed.

"But I want to say something else, too.  Over the last few months, all of us -- including and especially men who respect women -- have been forced to take a good, hard look at our own actions and think (perhaps, shamefully, for the first time) about how those actions have affected women.

"For instance, that picture.  I don't know what was in my head when I took that picture, and it doesn't matter. There's no excuse. I look at it now and I feel disgusted with myself. It isn't funny. It's completely inappropriate. It's obvious how Leeann would feel violated by that picture. And, what's more, I can see how millions of other women would feel violated by it -- women who have had similar experiences in their own lives, women who fear having those experiences, women who look up to me, women who have counted on me.

"Coming from the world of comedy, I've told and written a lot of jokes that I once thought were funny but later came to realize were just plain offensive.  But the intentions behind my actions aren't the point at all.  It's the impact these jokes had on others that matters.  And I'm sorry it's taken me so long to come to terms with that.

"While I don't remember the rehearsal for the skit as Leeann does, I understand why we need to listen to and believe women's experiences.

"I am asking that an ethics investigation be undertaken, and I will gladly cooperate.

In a press conference Thursday, Tweeden accepted Franken's apology and said that she "wasn't looking for anything" to happen in coming forward with her story.

"Nothing like that is ever funny," she said of Franken's behavior toward her.

Just as Franken volunteered to cooperate with an ethics investigation in his statement, Senate Majority Leader Mitch McConnell, R-Kentucky, on Thursday also called for the Senate's Select Committee on Ethics to review Franken's conduct.

"Regardless of party, harassment and assault are completely unacceptable -- in the workplace or anywhere else," McConnell said in a statement.

The following senators have also called for an Ethics Committee investigation:

Tweeden said that if the Ethics Committee chooses to investigate Franken, "that's up to them, I'm not demanding that."