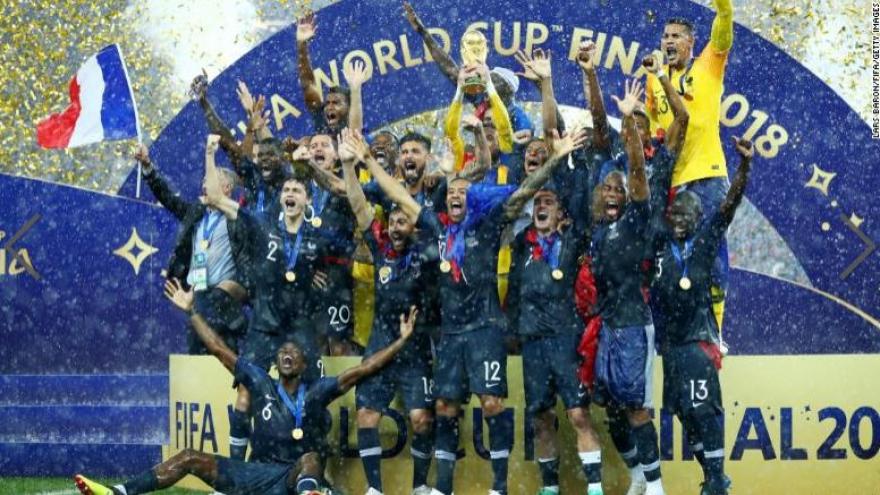 MOSCOW (AP) — Sliding across the rain-soaked turf holding the World Cup trophy tight, teenager Kylian Mbappe and the rest of France's players acted like the youthful bunch they are.

Nothing, not a Pussy Riot protest nor a postgame downpour that soaked Russian President Vladimir Putin, was going to stop the party.

The 19-year-old Mbappe became only the second teen after Pele to score in a World Cup final, helping France beat Croatia 4-2 on Sunday.

"I don't really realize yet what it is. The World Cup, it's a lot," forward Antoine Griezmann said. "I'm very proud of this team."

Mbappe had just shown his electrifying speed in the 52nd minute when play was held up by four protesters who ran onto the field. Russian punk band Pussy Riot later took credit for the incident — watched from the VIP seats by Putin, whose government once jailed members of the activist group.

Putin was later on the field to award medals to the players in a ceremony soon drenched in rain and joy. As thunder boomed and lightning cracked, FIFA president Gianni Infantino handed France captain Hugo Lloris the gold-and-malachite World Cup trophy.

Gold confetti stuck to the soaked Les Bleus as they paraded the trophy around the Luzhniki Stadium, a final act of an enthralling tournament in which Croatia reached its first final while powers Brazil, Germany and Argentina went home early.

About 12 minutes after a protester gave Mbappe a double high-five on the field, Mbappe sent a right-footed shot from 25 yards (meters) past goalkeeper Danijel Subasic. The goal put France up 4-1, closing the door on Croatia who had been the better team until he came to life.

Mbappe, who plays for Paris Saint-Germain in the French league, was born months after France won its only other World Cup title in 1998.

But it was Mbappe who put the match out of reach with a furious passage of play in the second half. In the 59th, a run from Mbappe started a play that ended up with Pogba on the edge of the penalty area. With his second attempt, the midfielder curled his shot beyond Subasic.

Griezmann scored from the penalty spot in the 38th minute fully four minutes after his corner kick was knocked out of play by Ivan Perisic's arm. The referee ruled it handball only after a video review, just as the first thunders claps boomed around the stadium.

France took the lead in the 18th when Croatia's tallest outfield player, 1.90-meter (6-foot-3) forward Mario Mandzukic, rose to meet Griezmann's free kick with the top of his head. He deflected it past his own goalkeeper.

Perisic and Mandzukic both scored for Croatia, first to equalize in the 28th minute and later as a consolation goal in the 69th, embarrassing Lloris with a flicked shot as the France goalkeeper tried to dribble the ball out of his goalmouth.

But the three-goal lead was too much for the red-and-white-checkered squad that made a habit of coming back — and played three straight 120-minute games before the final.

France coach Didier Deschamps became only the third man to win the World Cup as a player and a coach. He joined Mario Zagallo of Brazil and Franz Beckenbauer, who capatained West Germany.

Deschamps, France's captain 20 years ago, was lifted up by his players on the field and flung into the air several teams and caught. The normally staid coach did a few skipping dance steps in the rain before stopping and laughing at himself.

It was that kind of unbridled evening for the French who won with an exuberance not often seen in a mostly efficient, controlled title run.

Back home in France, thousands of fans headed to the Eiffel Tower to watch a broadcast on giant screens that Paris police closed the area more than two hours before kickoff.

Putin watched the game in a VIP section with the presidents of France and Croatia, Emmanuel Macron and Kolinda Grabar-Kitarovic.

Macron paced nervously out of his seat during the video review, and kissed his Croatian counterpart on both cheeks to console her after the game. They joined the medal ceremony and both kissed the gold trophy before it got to Lloris.

Finally, goals returned to the World Cup final in regulation time. The two previous finals were 0-0 after 90 minutes before being settled with a single goal deep into extra time.

Three goals in the first half was the most prolific since 1974, when West Germany went into the break 2-1 up against the Netherlands. That was the final score.

The six-goal final was the most since England beat West Germany 4-2 in 1966. It also ensured the 2018 World Cup had only one scoreless game, when France last played at Luzhniki Stadium against Denmark.