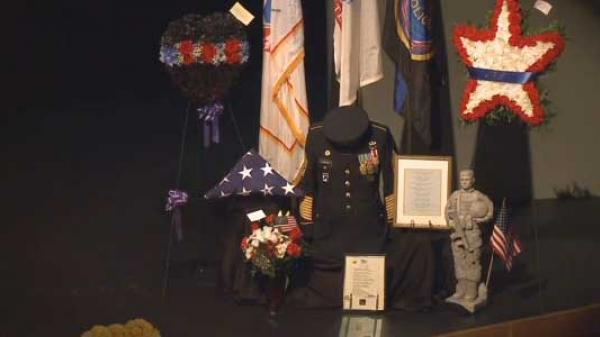 The funeral for Fox Lake, Illinois, police Lt. Joe Gliniewicz, who was fatally shot last week, drew thousands of mourners, including hundreds of police officers, to Antioch, Illinois, on Monday.
The funeral took place at Antioch Community High School.
Tomorrow will mark one week since he was gunned down by three unknown suspects while on duty.
Officers saluted the flag draped casket of police Lieutenant Joe Gliniewicz, as a heavy rain fell.
One of the pall bearers was the lieutenant's son, dressed in his military uniform.
Mourners hugged Lieutenant Gliniewicz's wife during the morning visitation, held inside a high school in the officer's hometown of Antioch, Illinois.
His uniform was on display, next to patriotic flower arrangements and flags.
Several different law enforcement agencies spoke at the funeral.
\"We are Gliniewicz strong,\" said one officer at the funeral.
Gliniewicz’s son was on stage while a bible verse was read.
An officer quoted Psalm 23:4 as an inspiration for Gliniewicz’s tattoo. The psalm said “As I walk through the valley of the shadow of death, I fear no evil because you are with me.”
Fox Lake Police Department issues the Medal of Honor to the officer's family for Lt. Joe Gliniewicz.
Glinewicz’s four sons and his wife were mentioned throughout the service.
\"It was a sense of family that our brother Joe was most proud of,” said one officer.
Many of the officers who spoke had a “Battle Buddy” on stage for support.
\"Every time one of our law enforcement falls, every member of law enforcement feels it,\" said Police Chaplain at funeral.
Authorities announced no major developments in the case over the weekend, but investigators said Friday that they had found a significant piece of evidence at the site where Gliniewicz was killed.
Share this article: