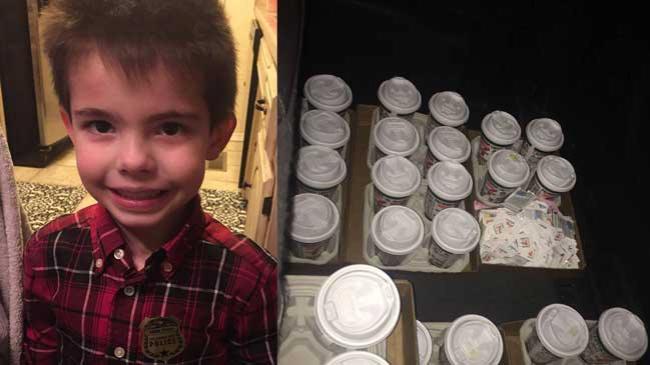 YUKON, Okla. (KFOR) - Four-year-old Colt Vinson saw the men and women he admired Tuesday, standing in the cold during a 16-hour standoff.

And, he decided to do something about it.

"He said, 'I think we should get them something,'" his mom, Jillian Vinson, told NewsChannel 4 Wednesday. "I said, 'What do you want to get them?' And, he said, 'I like pizza. Let's get them pizza.'"

So, Jillian called Domino's Pizza, which agreed to donate five pies to the officers on duty.

Then, she called the 7-Eleven down the street, which offered up 52 cups of coffee.

"That was really cool that he wanted to help," Jillian said. "You don't want your kids to be scared of police officers. You want them to like them and, you know, a lot of kids get scared of them. There's no reason to be. They're there to help and protect us, and I think every child should understand that."

Colt was not the only person who stopped to offer help Tuesday - far from it.

But, the boy's youth and friendly nature stuck out to Oklahoma City Officer Robert Gilmore.