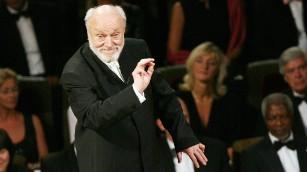 The 88-year-old classical music legend died in Greenwich, Connecticut, of complications from Parkinson's disease, the Philharmonic said on his family's behalf.

Masur led orchestras and opera companies throughout Europe before serving as music director of the New York Philharmonic from 1991 to 2002. He was later named music director emeritus, becoming the first to receive that title and only the second after Leonard Bernstein to be given an honorary position.

"Maestro Masur's 11-year tenure, one of the longest in the Philharmonic's history, both set a standard and left a legacy that lives on today," New York Philharmonic President Matthew VanBesien said in a statement.

A champion of Bach and Mendelssohn, Masur was a well-known humanist who believed in the healing power of music. He is credited with playing a key role in keeping the peace during demonstrations in East Germany in 1989, and, later, using music to ease souls after the attacks of September 11, 2001.

"His belief in music's power to bring people together was fierce and unwavering. Thanks for all you did for NYC," conductor Alan Gilbert said on Twitter.  Born in 1927 in Brieg, Silesia, now part of Poland, Masur studied piano, composition, and conducting at the Music College of Leipzig. In 1967 he was appointed the Dresden Philharmonic's chief conductor, a post he held until 1972 when he joined the prestigious Leipzig Gewandhaus Orchestra as kapellmeister (music director).

Masur is credited with playing a key role in keeping peace during demonstrations in Leipzig against East Germany's communist government in 1989. As tensions rose between police and demonstrators, he convened a meeting at Gewandhaus and issued a message over public loudspeakers and radio calling for peace.

The Philharmonic was in a period of artistic decline when Masur joined as music director in 1991. Under his watch, the Philharmonic expanded education programs, created its own recording label and introduced the Philharmonic's collaboration with Wynton Marsalis and Jazz at Lincoln Center.

In what the New York Times called "his finest hour, and a gift to the city," on Sept. 20, 2001, Masur led the Philharmonic in a nationally televised memorial concert to the victims of the September 11 in a performance of Brahms' "German Requiem." In the following months, Philharmonic musicians performed chamber music in public spaces near ground zero.

"Masur's years at the New York Philharmonic represent one of its golden eras, in which music-making was infused with commitment and devotion — with the belief in the power of music to bring humanity closer together," current music director Alan Gilbert said in a statement.

"The ethical and moral dimensions that he brought to his conducting are still palpable in the musicians' playing, and I, along with the Philharmonic's audiences, have much to thank him for."