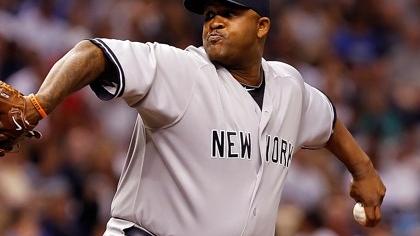 Sabathia released an official statement Monday to explain his decision, courtesy of the Yankees' official website:

"Today I am checking myself into an alcohol rehabilitation center to receive the professional care and assistance needed to treat my disease.

I love baseball and I love my teammates like brothers, and I am also fully aware that I am leaving at a time when we should all be coming together for one last push toward the World Series. It hurts me deeply to do this now, but I owe it to myself and to my family to get myself right. I want to take control of my disease, and I want to be a better man, father and player.

I want to thank the New York Yankees organization for their encouragement and understanding. Their support gives me great strength and has allowed me to move forward with this decision with a clear mind.

As difficult as this decision is to share publicly, I don’t want to run and hide. But for now please respect my family’s need for privacy as we work through this challenge together.

Being an adult means being accountable. Being a baseball player means that others look up to you. I want my kids -- and others who may have become fans of mine over the years -- to know that I am not too big of a man to ask for help. I want to hold my head up high, have a full heart and be the type of person again that I can be proud of. And that’s exactly what I am going to do.

I am looking forward to being out on the field with my team next season playing the game that brings me so much happiness."

After the announcement, Yankees general manager Brian Cashman spoke about Sabathia, saying: "It wasn't a phone call I was expecting," but added the team will "do everything in our power" to support the pitcher, via Mark Feinsand of the New York Daily News.

"CC has demonstrated a great deal of courage...Time and place have no bearing," Cashman said, per Feinsand. "There's something here that needs to be taken care of."

Sabathia has struggled to find his form over the past three seasons and is coming off of a 2015 campaign in which he posted a 6-10 record with a 4.73 ERA. Those numbers suggest he's a shell of the southpaw stud who won 59 games in his first three seasons with the Bronx Bombers.

A nagging knee injury also limited Sabathia to eight starts in 2014 and landed him on the disabled list late this year.

The former Cy Young Award winner and six-time All-Star has a World Series title to his name as well, so Sabathia has accomplished about all he could have hoped to in a stellar career. At age 35, it appears he is keen on returning to the mound in 2016, though he may be hard-pressed to rediscover the form that made him one of baseball's best pitchers in his prime.

Above all else, the concern is for Sabathia's well-being. If he can take care of himself away from the field, there's at least a chance his transcendent talent will allow him to stage a successful comeback once he's fully recovered.

As for the Yankees' immediate outlook, they'll start Masahiro Tanaka in Tuesday's American League Wild Card Game against the Houston Astros, per MLB.com's Brian McTaggart. It's a win-or-go-home scenario, but home-field advantage should help New York as it goes up against Astros ace Dallas Keuchel.