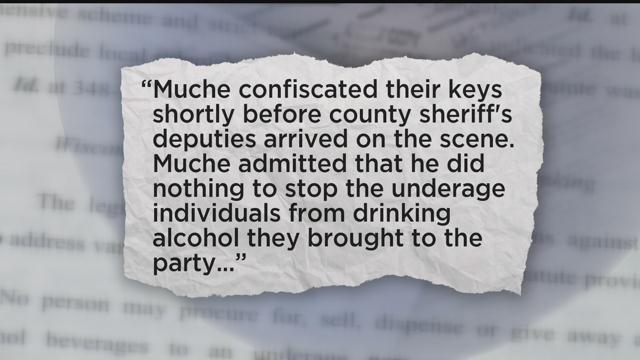 Officials in Fond du Lac County are trying to figure out what to do next after a Wisconsin court strikes down their social hosting ordinance.

The ordinance sought to punish parents who allowed underage kids to drink at parties held at their homes.

The case stems back to 2015 when Fond du Lac County deputies issued Stuart Muche a ticket when a group of underage kids arrived late and uninvited to his son's graduation party, according to court documents.

Some of those kids began drinking and - quoting court documents - "Muche confiscated their keys shortly before county sheriff's deputies arrived on the scene. Muche admitted that he did nothing to stop the underage individuals from drinking alcohol they brought to the party, but he maintains that he did not host an underage drinking party."

Muche contested the punishment and the 2nd District Court of Appeals sided with him.

Now county officials, including Fond du Lac County Executive Allen Buechel, are reviewing why the decision went the way it did.

"I do know that if this ruling stands then in Fond du Lac county someone can serve alcohol to underage minors in their home and not be penalized for it," Buechel said.

"It's not just their children. It's the other children coming over as well. I know at 16 or 17-years-old you may not want to be considered a child but nevertheless that's what you are," Buechel said.

Muche's attorney says that the county still has laws to go after true social hosting in different way. For example, people can still be charged for aiding in the delinquency of a minor.

In court, the social hosting question centered more on the language: Does the state law apply for at-home situations where a parent isn't necessarily aware of what's happening.

Judges agreed that it did not and said the Fond du Lac ordinance went too far.

Similar rules currently exist in areas including Mequon and Wausau. This ruling calls those rules into question.

A decision on an appeal in the Fond du Lac case is expected in the coming weeks.