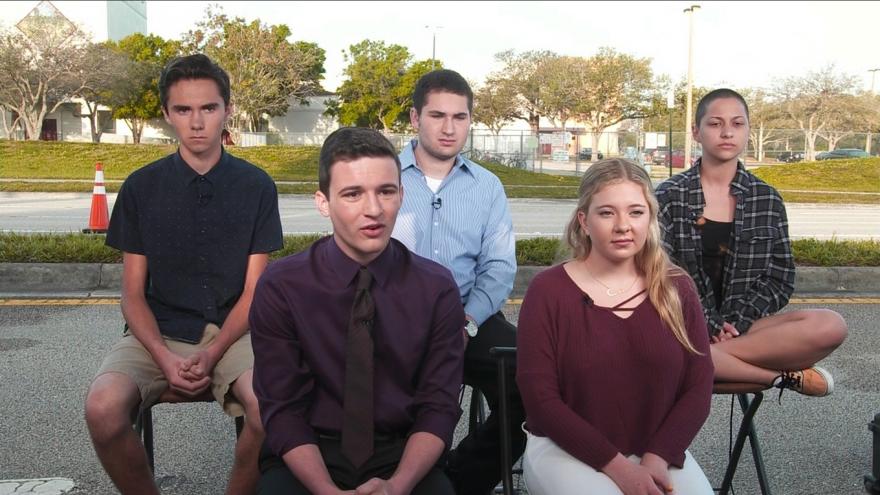 TALLAHASSEE, Fla. (CBS News) -- Students who survived the Florida school shooting prepared to flood the Capitol Wednesday pushing to ban the assault-style rifle used to kill 17 people, vowing to make changes in the November election if they can't persuade lawmakers to change laws before their legislative session ends.

About 100 Marjory Stoneman Douglas High School students arrived at a Tallahassee high school to extended applause late Tuesday after a 400-mile trip on three buses. They told the 500 students and parents waiting for them that they're fighting to protect all students.

Despite their enthusiasm and determination, the students and their supporters aren't likely to get what they really want: a ban on AR-15s and similar semi-automatic rifles. Republican lawmakers are talking more seriously about some restrictions, but not a total ban.

Instead, they're discussing treating assault-style rifles like the one suspected gunman Nikolas Cruz is accused of using in the Valentine's Day attack more like handguns than long guns. That could mean raising the minimum age to purchase the weapon to 21, creating a waiting period and making it more difficult for people who exhibit signs of mental illness from buying the weapon even without a diagnosis.

Democrats attempted to get a bill to ban assault rifles and large-capacity magazines heard on the House floor on Tuesday. Republicans, who dominate the chamber, easily dismissed it. Students who were at the Capitol ahead of their classmates who arrived late Tuesday found Republicans steered the conversation away from gun restrictions.

Rachel Catania, 15, a sophomore at Stoneman Douglas High School in Parkland said she got a lot of non-answers from the politicians she spoke with Tuesday.

The students on the seven-hour bus ride checked their phones, watching videos and reading comments on social media about the shooting, some of which accused them of being liberal pawns.

As the grieving Florida students demanded action on guns, President Trump on Tuesday directed the Justice Department to move to ban devices like the rapid-fire bump stocks used in last year's Las Vegas massacre. It was a small sign of movement on the gun violence issue that has long tied Washington in knots.

"We must do more to protect our children," said Mr. Trump, a strong and vocal supporter of gun rights. He added that his administration was working hard to respond to the Florida rampage.

The students planned to hold a rally Wednesday to put more pressure on the Legislature.

"I really think they are going to hear us out," said Chris Grady, a high school senior aboard the bus.

The Feb. 14 attack initially appeared to overcome the resistance of some in the state's political leadership, which has rebuffed gun restrictions since Republicans took control of both the governor's office and the Legislature in 1999. However, many members of the party still have strong resistance to any gun-control measures.

Florida has a reputation for expanding gun rights. Negron sponsored a 2011 bill that Republican Gov. Rick Scott signed into law that banned cities and counties from regulating gun and ammunition sales.

Scott organized three committees to look at school safety, mental health and gun safety issues that met Tuesday and vowed to make changes to better protect students. While Scott told reporters several times that "everything is on the table," he did not answer whether his proposal would include any bans on any type of weapons.

Instead, Scott said he is interested in making it harder for people who are temporarily committed to obtain a gun. He also pledged to increase spending on school safety programs and on mental health treatment.

Authorities said Cruz, 19, had a string of run-ins with school authorities that ended with his expulsion. Police were repeatedly called to his house throughout his childhood. His lawyers said there were many warning signs that he was mentally unstable and potentially violent. Yet he legally purchased a semi-automatic rifle.

Newly released documents reveal that in September 2016, an investigator with Florida's Department of Children and Families (DCF) visited the family to investigate allegations of medical neglect. The investigator noted Cruz had depression, ADHD and autism. He cut his arms in a Snapchat post and had "plans to go out and buy a gun," the investigator noted at the time.

Stoneman Douglas senior Diego Pfeiffer was realistic about what change would happen before the Legislature goes home March 9, but said anything is a good first step.

"The best case scenario is we move a step forward and that's all we're asking here. We're asking to help save student lives," he said. "Whether it's funding or mental health or gun safety or any of that sort of stuff - I am pro any of that."

But he also said if change doesn't come in the Legislature, he noted he's now 18 and he has the power of his vote.

"You're our senators and you're our representatives for now. If you don't help us make a change soon, you will be left in the dust," he said. "I'm happily going to vote for anybody who's going to be on our side, the side of children's lives. How can you say no to that?"