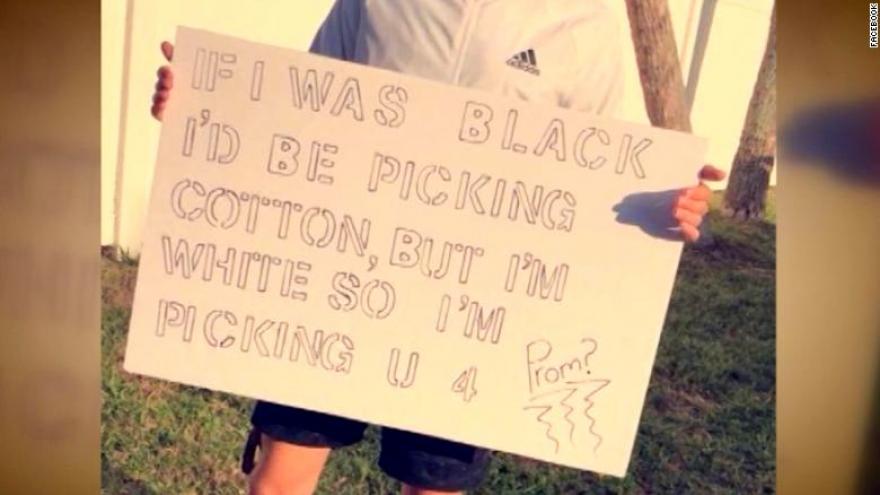 (CNN) Creative "promposals" are all the rage these days among high schoolers. But this one didn't go so well.

A senior at Riverview High School in Sarasota, Florida, recently decided to ask a girl to the prom by holding up a sign.

A picture of the unidentified student holding the sign was posted to social media -- where people love to have nuanced conversations on race -- over the weekend. It immediately sparked outrage, with someone on Snapchat asking, "Whooo said this was OK?"

The school didn't think it was OK. Acting principal Kathy Wilks sent a letter to parents Monday saying the school is investigating and "absolutely does not condone or support the message conveyed in this post," according to CNN affiliate WFLA.

The Sarasota County School District weighed in too. It sent in counselors to Riverview High School in case students wanted to talk about the controversy and said it would work with civil rights groups such as the NAACP to develop a roundtable forum to talk about race.

"Many who saw the post ... are understandably upset with its contents and commentary," the school district said in a statement. "This incident remains an ongoing investigation and any disciplinary action and recommendation will be made accordingly.

"Although this message is one student's opinion, we take the matter of racial relations and school safety seriously, and we look forward to working with our students and these outside groups to have a meaningful and informative dialogue and expanded curriculum related to this important national topic."

The promposal sign also caught the attention of the local NAACP chapter, which condemned its message.

"A strong statement needs to be made to their student body that this type of behavior will not be tolerated on any of our campuses throughout the school district, and, if so, there are going to be severe consequences," Trevor Harvey, president of the NAACP's Sarasota chapter, told WFLA.

The student who made the promposal sign has since posted an apology on social media, according to WFLA.

Riverview High School's prom is scheduled for May 5.

Riverview student Erin Williams, who posted a photo of the sign to Facebook, felt the promposal was a joke that went too far.

"I think it was something that he thought was gonna be funny, but its not," Williams, who is black, told WFLA. "So this is a good thing to talk about, because you have to recognize something to change it, and then you have to keep it that way," she added.