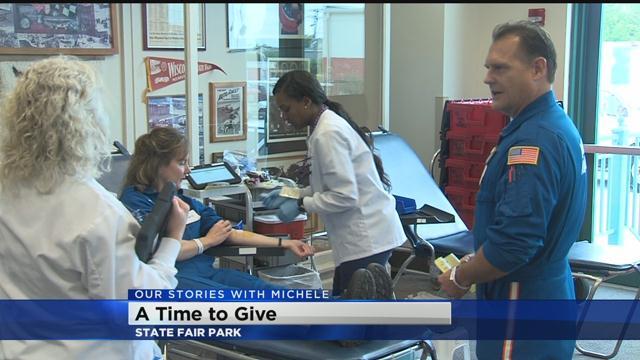 Two Flight for Life medical team members were so inspired by one of their patients that they were the first two donors in line Wednesday at State Fair Park for the 14th annual Big League Blood Drive.

Paramedic Peter Brierton recalling  those fateful moments last month when his medical team transported massive amounts of blood to farmer Jason Pansier  at the scene of a farming accident near Green Bay, before the farmer and volunteer firefighter was transported to Froedtert Hospital.

Flight nurse Linda Owens joined him as the first donors.

"It was a very complex flight," Brierton told CBS 58 News. "I give Jason all the credit. He's a very resilient fella."

The family of the 37-year Pansier, who received a remarkable 250 units of blood, was also on hand to personally thank donors.

Sister Holly Schlag says Jake, as they call him, has been nothing but positive since the July 8th accident with a tractor that cost him his leg.

He has begun rehab and got into a wheelchair for the first time Tuesday.

"Just to see Jake work hard every day just to regain his strength back," Schlag shared. "It's an inspiration."

Jason plans to write a thank you note to each donor who attends the drive, as a gesture for all of the life-saving gifts he’s already received.

His family members will gather the names of donors who’d like to receive a note from Jason.

"Just to see all these people donating who have never met Jake. It's doing good things for good people," added Schlag.

Police Lt. Sebastian Racklow  is among those giving thanks. He's the frequent recipient of  blood transfusions while battling abdominal cancer.

It was a scene at the Tommy Thompson Center that proves that inspiration can come in many forms and that some heroes wear uniforms, others just roll up their sleeves.

All attempting blood donors will receive a voucher for two tickets to one of the following Milwaukee Brewers games: