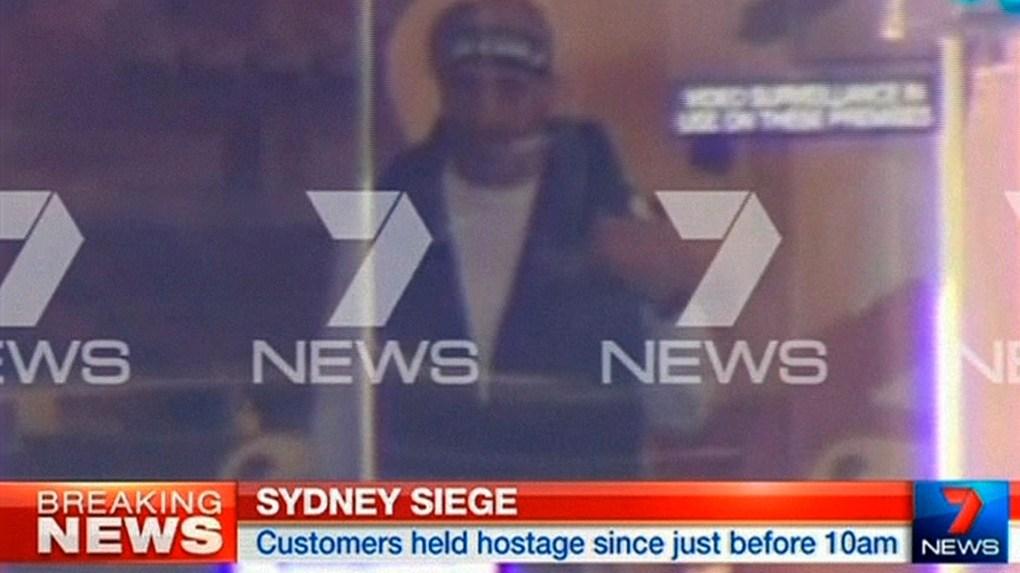 Five people have fled from a cafe in the heart of Sydney where a dramatic hostage taking is unfolding Monday.

But an unknown number of people remain in the cafe, held by at least one armed hostage taker.

Hundreds of police officers have shut down a usually bustling area in Australia's most populous city amid the crisis.

Chilling images from local media showed people, believed to be hostages, with their hands pressed against the glass of the Lindt Chocolate Cafe in Sydney's central business district.

Footage showed them holding up a black flag with Arabic writing on it that reads: \"There is no God but God and Mohammed is the prophet of God.\"

Three people who were seen running out of the cafe \"are now out of the building and they are now with police,\" said New South Wales Police Deputy Commissioner Catherine Burn, declining to give details about whether they escaped or were let go.

Authorities said many of the details about the situation remained unclear, including the number of people inside the cafe and the motivations of the hostage taker.

\"We don't know whether this is politically motivated, although obviously there are some indications that it could be,\" Australian Prime Minister Tony Abbott told reporters.

The Islamic writing on the banner stoked fears that the crisis in Sydney could be linked to extremists. Australia, which is part of the international coalition fighting the terrorist group ISIS in the Middle East, said in September that it had foiled a plot by Islamic militants to carry out a public execution.

New South Wales Police Commissioner Andrew Scipione said it wasn't yet clear whether the situation at the cafe was a terrorist event but that police are on \"a footing that would be consistent with a terrorist alert.\"

Burn said police negotiators are now in contact with a hostage taker, who appears to have taken staff and customers captive as people were heading to work on Monday morning in the Martin Place area.

Chris Kenny, an editor at The Australian newspaper, said he was at the cafe Monday morning. He left shortly before the siege started.

\"As police quickly swarmed and cleared the area, I turned to see a man against the window, facing out with his hands raised,\" he wrote in his account of the incident. \"At first I was relieved thinking this was the gunman responding to police -- but soon the awful realization the customers were being forced against the windows.\"

Seven Network reported that at least 13 people are being held at the cafe, but Scipione declined to say how many were in there.

Police barricaded off streets and evacuated buildings near the cafe, bringing an eerie quiet to a district typically buzzing with pedestrians and vehicles.

The Martin Place train station was shut down, according to police. They urged people to stay away from the area, but some local office workers gathered at the scene to try to find out what was going on.

The buildings evacuated included the U.S. Consulate General, said Alicia Edwards, a spokeswoman. All personnel have been accounted for, although it's not known whether there are any U.S. citizens among the hostages. U.S. President Barack Obama has been briefed on the situation.