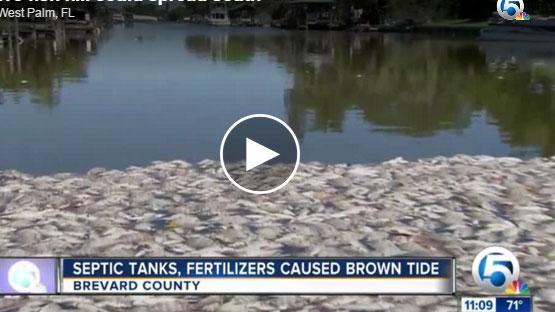 (CNN)Florida may be the fishing capital of the world, but you'd never know it from the latest scenes around the state's Indian River Lagoon.

Usually idyllic beaches, waterways and estuaries near the massive, biodiverse ecosystem along central Florida's Atlantic coast are littered with scores of dead, rotting fish; an estimated hundreds of thousands of them are floating belly up in brackish, polluted water as far as the eye can see.
"The heartbreaking images can be seen for miles," said Mike Conner, who has been fishing the area since the 1970s. "All up and down the coast, it's the same story, and it could get worse before it gets better."
But the devastation isn't merely what is visible on the surface; it runs far deeper.
El Nino has soaked Florida recently, even during its usual "dry season."
In January, parts of central Florida received triple the amount of rain they normally do for the month. All that rainwater eventually made its way into estuaries via urbanized neighborhoods, picking up fertilizer and other pollutants along the way.
But that's not all.
Temperatures were warmer than usual during the winter, allowing a toxic algae bloom and brown tide to deplete the water of oxygen.
Ed Garland, a spokesman for the St. John River Water Management District, said officials can't determine the effect from the brown tide on the seagrass yet since the water is too cloudy. In 2011, more than half of the seagrass reportedly died off, and there are still damaged areas from that die-off.
These scenes are no doubt jarring to the eyes -- and not to mention the nose -- but state environmental officials said they have happened before.
"Fish kills happen all the time," said Kelly Richmond of the Florida Fish and Wildlife Research Institute. "This is a massive kill, but there are fish kills all over the state."
However, Richmond conceded, "We have had brown tide there before but nothing to this extent."
The impact extends beyond the shores of the Indian River Lagoon -- comprised of the Mosquito, Banana River and Indian River lagoons -- and into the pocketbooks of Floridians, especially those in the state's two most profitable industries: tourism and fishing.
"Our oysters are dead, seagrasses are dead," said Conner, the fisherman. "It (will be) hard to recover. You never fully recover."
Share this article: