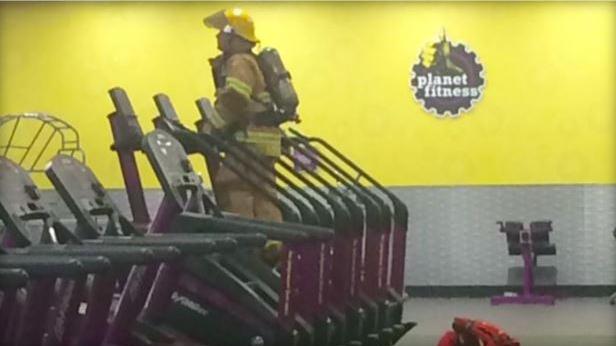 But on Sept. 11, the front desk assistant at Planet Fitness in Maryville, Tennessee, spotted an unexpected guest before her shift even started: a firefighter in full gear climbing a stair stepper.

“I saw him getting ready to step up on the stairs, and I was just taken aback,” Bauler told CBS News.

When the man explained the reason why he wanted to wear the uniform during his “workout,” Bauler couldn’t help but get emotional.

“This man asked if it was okay for him to climb 110 sets, fully suited, of stairs in honor of his fallen brothers and sisters for 9/11,” Bauler posted on Facebook.

The photo of the man, later identified as Jason Harding, went viral with nearly 150,000 shares.

Dozens of people commented, praising the man’s powerful tribute to those who lost their lives in the Sept. 11 attacks.

“Such an honor to see,” one wrote.

As soon as Bauler realized the post she was just hoping to simply share with her friends was going viral, she gave Harding a call.

“He said, ‘That’s awesome; I hope everybody gets the true meaning of why I’m doing this,’” Bauler recalled.

“I cried when I read your post and saw him there in the moment,” his wife, Kristen, replied. “Thanks for letting him show his respect and honor those fallen!”

“I want people to see that he’s doing it for those that have fallen who weren’t able to complete those stairs,” she said. “When I look at those pictures, I see those brothers and sisters on his back, and he’s carrying them up those stairs to complete what they started.”