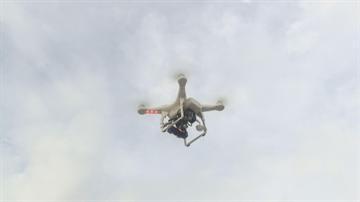 The investigators say this technology could help save the lives of fire fighters and the public.

In one example, a drone with a camera attached took the place of a fire fighter having to climb three stories to take a picture of a burned structure.

Fire Investigator Adam Harden came up with the idea.

He said that the FAA told him they are the first in Wisconsin to use a drone for fire investigations.

Harden would like to eventually equip a thermal imaging camera as well.

He said that kind of camera could be used to spot people inside burning buildings or target hot spots.

One of the challenges for Harden and the other fire investigators when it comes to thermal imaging cameras and other equipment is cost.

Harden would like to expand the drone effort to also help the Sheboygan County Sheriff's department with tactical situations, as well as the Coast Guard on Lake Michigan.

Along with Drones comes talk of controversy, specifically related to privacy, safety, and air space.

Harden and his co-pilot/ fellow fire investigator, Tim Ellis, both assured CBS 58 that the drones are strictly for public safety.

Harden said their max flight height is around 400 feet (about 40 stories) but he admitted that's far higher than he needs to go for investigations.

He also said the video recorded is only for fire department use and not for public viewing.