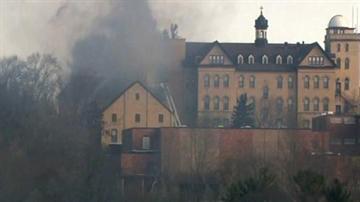 The fire was eventually upgraded to five plus alarms and dozens of area fire stations responded to assist.

Water had to be brought in from other local areas.

Officials said that this was the biggest call in the history of their current emergency call system, MABAS.

There was a fire at St. Lawrence Seminary on Christmas night in 1868, which burned the entire building to the ground.

The building that caught fire Saturday, St. Joseph Hall, was one of the first building built after the fire in 1868.

It’s one of the oldest buildings on campus and houses the music department in its upper two floors.

Crews had already begun tearing the building down Saturday.

School officials said that classes will resume on Monday.