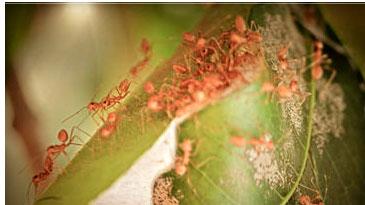 BIRMINGHAM, Ala. (CBS NEWS) -- An Alabama woman standing atop a hay bale was attacked by fire ants and died of an apparent allergic reaction the day after her mother died, authorities and a relative said Friday.

A joint funeral was held Thursday in Selma for the women, 29-year-old Kalyn Rolan and 53-year-old Roberta Lynn Duke, both of Prattville.

Rolan's mother-in-law, Sheila Rolan, said she still can't believe both women died within a day of each other.

"It's something I've never had to deal with, especially attending two funerals," said Rolan. "I loved her mother, and she was my daughter-in-law for 10 years."

Duke died May 19 after suffering from lung disease, Rolan said, and the younger woman was in rural Dallas County the next day with husband Brandon Rolan preparing for the funeral. The older woman had lived in a mobile home with the couple as her health declined, Rolan said.

Kalyn was attacked while atop the remains of a large round hay bale. She was talking on a cellphone with a longtime friend, apparently about her mom's funeral arrangements, Rolan said.

"Brandon said she was standing there with a stick talking on the phone. She was just beating the hay with the stick, Brandon said, and it stirred up the ants," Sheila Rolan said. "She ran off the hay stack, and they tried to get her clothes off to get the ants off her."

Coroner Alan Dailey said the woman was treated by volunteer firefighters and then ambulance workers during a 25-mile ride to a Selma hospital, where she was pronounced dead. Autopsy results aren't complete, he said, but it appeared the woman's airway closed from anaphylactic shock, a severe allergic reaction to the bites.

"She had multiple bites around both ankles," Dailey said. "Those red ants are a problem all over the South. They're mean, and by the time you know you've been bit once they are all over you."

Kalyn Rolan had severe allergies to insects, shellfish and peanuts, Sheila Rolan said, but the day of her death she didn't have a medical device on hand that can be used to inject medicine to counteract allergic reactions. Relatives are now trying to raise $5,000 to pay for her funeral, and a fundraiser is planned Saturday at the Waffle House restaurant where Brandon Rolan works.

The Centers for Disease Control and Prevention says 90 to 100 people die annually in the United States from insect bites.