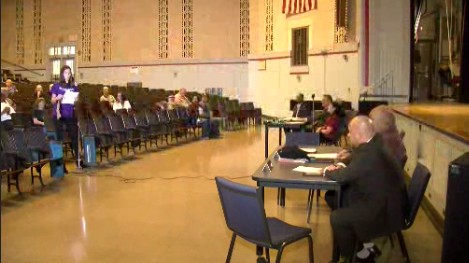 MILWAUKEE - Pleas from neighbors on ways to improve the community. It was all part of an ongoing conversation to solve the public safety crisis in Milwaukee.

Yesterday was the city's final public hearing and several neighbors say lowering crime starts from the ground up.

"It's not a back and forth with the aldermen. We want to hear from you, as to your feelings on safety in your neighborhood and across Milwaukee. And how together we can all improve."

That is the message Milwaukee's aldermen gave to neighbors at the final public safety hearing Saturday morning. In a week where seven people were killed, many suggestions came forward. One was a teenager who urged city leaders to help youth.

"If you put more money into the youth programs, then that would take more violence off the street. If the teens were actually busy doing something they love, then they wouldn't be out here making trouble."

The message was the same for one woman who works with children. "Let's stop before they are victims. Let's give all the youth in our community an opportunity to succeed."

The aldermen sat silently, listening to each person willing to speak up. They say that's their goal, to take these suggestions and work them in to plans that will better the city. Some are skeptical, however. "My concern was that we have public hearings, to get public hearings when it's too late to really be useful with the budget about to passed on Friday. I think the fact that the public was engaged after the DA, after the police force, after the CBOs, that was the wrong time to do it."

If you missed the meetings or have more to say, there is a survey you can take. Just look under the links section of our website.