Fighting ISIS, and Tucking into Some Turkey 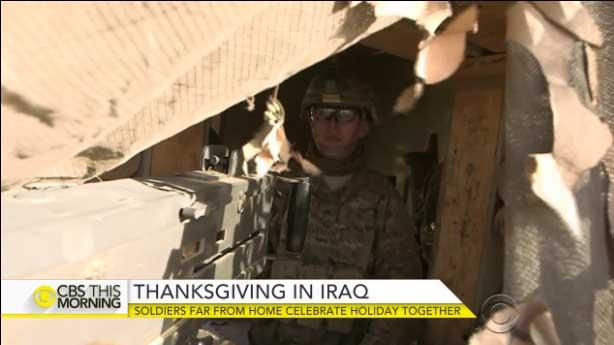 (CBS NEWS) Six thousand American service members based in Iraq are celebrating Thanksgiving today. For some of the troops, the deployment is their first time away from home. But thanks to the Army’s cooks, they’re not missing the taste of a Thanksgiving meal.

Holly Williams visited the 101st Airborne Division at Camp Swift near Mosul, as the soldiers prepared to celebrate the holiday.

These soldiers, in the fight against ISIS, are fresh-faced, many of them not long out of high school.

It’s a long way from home for Private First Class Onae Beam, a 19-year from Fontana, Southern California, on his first tour of duty.

“This is my first time out of the U.S. You know, I didn’t leave California until I went to Basic to Georgia... This is my first one,” Beam said, smiling. “You know, I came out of basic, couple of months -- air assault school and stuff like that -- then straight here.”

Private Beam and many others at Camp Swift were children when the U.S. invaded Iraq in 2003, and they told us they don’t know very much about America’s recent history here.

But five years after the U.S. said it had left Iraq for good, there are now 6,000 American service members back in the country again.

Private First Class Patrick Meehan from Pepperell, Massachusetts, is part of the security detail for the senior officers who work in the camp’s command center, launching airstrikes on ISIS.

“So the idea is that you could give your life to protect senior officers?” Williams asked.

“Is that scary?” Williams asked.

These are big jobs resting on very young soldiers.

Specialist Monique Frink, 22, from Goldsboro, North Carolina, is one of three cooks at the base who’ll cater Thanksgiving lunch for 150 from a tiny kitchen.

Frink told us she’s thankful to her grandfather, who also served as a military cook, inspiring her to enlist.

But her recruiter first tried to convince her away from the job.

A passion to serve their country -- in many different ways -- has led them half way across the world, and into the battle to defeat ISIS extremists.