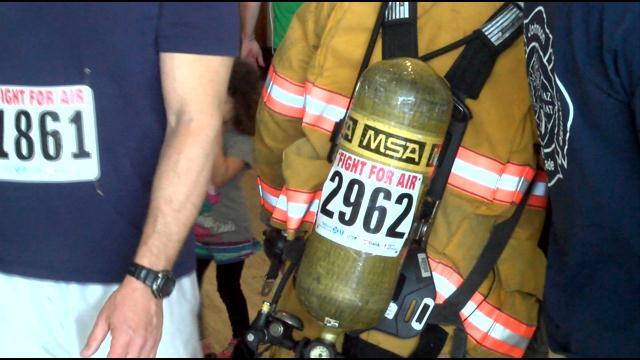 The tag line of the American Lung Association's annual \"Fight for Air\" climb is \"We climb for those who can't breathe on their own.\"  Local firefighters did just that at the US Bank building in downtown Milwaukee.

Firefighters are put into situations every day that makes it hard for them to breathe and they come back year after year arguably to climb harder than everyone else.

Forty-two floors, ninety-four flights of stairs. The \"Climb for Air\" is a challenge for all.

But especially for firefighters who do it in their full gear, boots, air tanks and all, adding an extra 70 pounds or more to their backs.

Finley was feeling good before his climb but after admits how tough it really was.

\"Every flight of stairs there was that landing at the bottom that you could sit and rest for as long as you wanted because there was nobody pushing you, but the biggest challenge was probably pushing yourself to do it because you're doing it for a good cause,\" said Finley.

The goal? Be the fastest fire department to run up all 42 floors and though it sounds more like punishment, participating in the Anthem Fire Challenge has become a badge of honor for firefighters, who came from all  across the state, including David Poster.

Some exceptional climbers make it up to the top in about ten minutes time. but no matter how long it took, there was the same response at the end of the race from all.

\"It's a challenge and I'm healthy. To try and do that every day? It'd be a struggle,\" said Finley.

And they say they will keep coming back to fight.