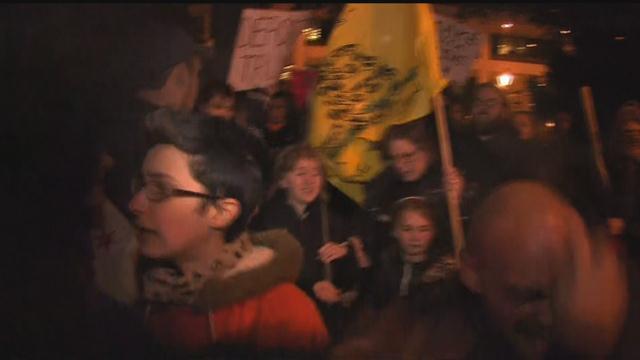 The protest started and ended at Red Arrow Park, but not before circling downtown twice. Before it ended, protestors deliberately made a stop at the BMO Harris Bradley Center, where a Milwaukee Bucks basketball game was ending. They said they wanted to send a message to the fans who were leaving.

While the protest started with about 600 people, it thinned as the night went on, ending around 10 PM back at the park. The crowd was largely filled with people protesting President-elect Donald Trump, but there were a number there supporting him.

"It's a big waste of energy and waste of time and if the coin was flipped on the other side, you wouldn't see us Trump supporters losing our minds, disrupting traffic, causing civil disobedience if Hillary won. Just like when Obama won, you get disappointed and you move on with your life, " said one Trump supporter.

And while the night was mostly peaceful, a fight did break out at Red Arrow Park, pushing right into our  photojournalist and reporter. We saw a man yelling and waving a flag in the crowd. A few seconds later, a protestor sprayed him in the face, multiple times, with pepper spray. Police were nearby the entire night and while that disturbance happened, we still have heard no reports of any arrests.

Those we spoke to who came out, not to protest, but just to observe say its fine to be upset but not when it disrupts the city.

"They don't know what its like to lose. A lot of these people in their 30's have been handed everything their whole life. They're facing something they don't support and they have to learn how to work with one another instead of just lash out," said the Trump supporter.

Again, Milwaukee Police tell us no arrests were made. Meanwhile, organizers say, this is just the beginning of their fight.