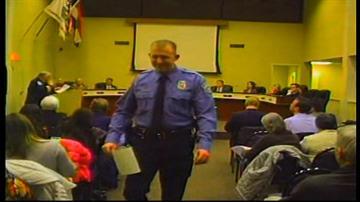 (CNN) -- As the St. Louis suburb of Ferguson calmed early Friday after nights of protests over the fatal shooting of an unarmed black teen, the question remains: Where's the police officer who pulled the trigger?

Separate federal and local investigations are under way, and Wilson -- who has received death threats -- has disappeared from public view.

Here's what is known about his whereabouts.

Where is he now?

Few outside Wilson's family and authorities know for sure.

Wilson owns a house in a modest neighborhood about 20 miles from Ferguson. He bought the house shortly after he was divorced last year, according to the St. Louis Post-Dispatch.

But several neighbors have told CNN that Wilson left home before his name was released last week.

What are his neighbors saying about his whereabouts?

Not much. Most have shunned reporters' requests for interviews, and some put signs in their yards shooing away journalists.

\"We don't know anything ... Pray for Peace,\" one read, according to the Post-Dispatch.

\"We have 2 children. Do not knock!! No comment,\" another family wrote.

Any trails on social media?

The newspaper reported that Wilson deactivated his social media accounts before his name went public.

The only social media presence for him now is from supporters, who have set up Facebook pages to support and raise money for him.

Posts express frustration about not being heard in the media and allege a lack of support for Wilson and law enforcement.

Has he contacted his friends?

One friend, Jake Shepard, told the Daily Mail newspaper in Britain that he'd texted with Wilson after a CNN appearance, and a woman going by the name \"Josie\" called a radio show to say she knew his side of the story.

The Daily Mail reported that Shepard said he didn't know for sure where Wilson is but that he's safe and under 24-hour guard.

Shepard said he received a text from Wilson after his CNN appearance, thanking him for the kind words he'd said, the newspaper reported.

In his CNN interview, Shepard said he couldn't imagine the officer killing somebody.

\"I can say -- without speaking to Darren, without even having heard his statements -- that, at that moment in time, he was scared for his life,\" Shepard said.

In the text conversation, Wilson said that, among other things, he \"can't go out\" because of the tumult over the shooting, the Daily Mail reported.

CNN can't confirm the authenticity of the messages. Shepard has declined further interview requests with the network.

As for \"Josie,\" it's unclear what relationship she has to the officer. But a source with detailed knowledge of the investigation says her account of what happened tracks with what Wilson has told investigators.

What is the police department saying?

Authorities are not saying where Wilson is.

Wilson, who has six years on the force with no disciplinary issues on his record, is on paid administrative leave. If he returns to duty, he will have to undergo two psychological evaluations, authorities said.

What's next for him?

It depends on the outcome of the investigations. He could return to work -- which seems unlikely -- face charges or just fade away from public view as attention to the shooting declines.