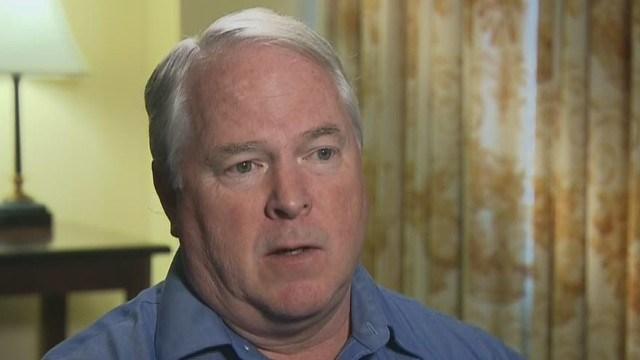 Jackson and the city \"have agreed to a mutual separation,\" Ferguson officials announced.

\"It's a really hard pill to swallow,\" Jackson said in a text message responding to CNN's request for comment.

He also confirmed his resignation in a letter to Ferguson's mayor.

\"It is with profound sadness that I am announcing I am stepping down from my position as chief of police for the city of Ferguson, Missouri,\" Jackson said, adding that serving the city as police chief \"has been an honor and a privilege.\"

The resignation will go into effect March 19, Jackson said, to \"provide for an orderly transition of command.\"

\"I will continue to assist the city in any way I can in my capacity as private citizen,\" Jackson wrote.

But even though he's about to be out of a job, Jackson will still collect a paycheck.

Jackson will receive a severance payment and health insurance for one year, the city said, with Lt. Col. Al Eickhoff assuming his duties during a nationwide search for a new chief.

Ferguson Mayor James Knowles said he couldn't go into details about the personnel discussions behind the decision to give Jackson a year of severance pay.

\"I think it's fair to say that in many executive level private industries, you would get a similar treatment,\" he said.

Knowles said the police chief decided to resign \"after a lot of soul searching.\"

\"I think it's important that we recognize that the chief made this decision because he wanted to do this,\" Knowles said. \"He thought it was the best for the city and the Police Department.\"

Jackson's resignation is the latest fallout from the Justice Department report, which exposed problems in the city's policing tactics and faulted Ferguson's officers for seeing residents as \"sources of revenue,\" a practice that federal investigators said disproportionately targeted African-Americans.

The investigators also found evidence of racist jokes being sent around by Ferguson police and court officials.

Last week, Jackson declined to comment on details in the report.

\"I need to have time to really analyze this report so I can comment on it,\" Jackson told CNN Thursday.

When asked what he planned to do about the report's findings, the chief said he would \"take action as necessary.\"

Knowles told reporters Wednesday that the city is still analyzing the report.

\"We continue to go through that report and talk about where the breakdown was,\" he said. \"The chief, being an honorable man, decided we needed to talk about the way moving forward was with someone else. He left.\"

City officials, he said, still believe the Police Department can be reformed without being eliminated.

\"The city of Ferguson looks to become an example of how a community can move forward in the face of adversity,\" the mayor said. \"We are committed to keeping our Police Department and having one that exhibits the highest degree of professionalism and fairness.\"

When Jackson became Ferguson's police chief in 2010, it was supposed to be a relatively easy way to cap his career in law enforcement.

After some 30 years with the St. Louis County Police Department, serving as commander of a drug task force and SWAT team supervisor, being a police chief of a smaller department should have been less stressful.

The shooting of Michael Brown last year changed everything.

Brown, an African-American teen, was unarmed when he was shot by a white Ferguson police officer. The incident exposed feelings of distrust between Ferguson's black community and its police department, which is overwhelmingly white.

Darren Wilson, the officer who shot Brown, won't face any criminal charges for the shooting. In November, a grand jury decided not to indict him. Last week the Justice Department said Wilson's actions \"do not constitute prosecutable violations\" of federal civil rights law. He resigned from the department in November, citing security concerns.

But that hasn't stopped criticism of the department from local residents and top federal officials.

Even before the Justice Department report was finished, U.S. Attorney General Eric Holder said it was \"pretty clear that the need for wholesale change in that department is appropriate.\"

Critics have accused Jackson of inflaming tensions in the St. Louis suburb with his response to the shooting.

Over the past six months, Jackson has defended his officers and vowed to work with the community.

\"I intend to see this thing through. And I've been working with a lot of community members to work on some progressive changes that will bring the community together and to open up dialogue and getting us all talking about serious issues and actually creating solutions to problems,\" he told CNN in November.