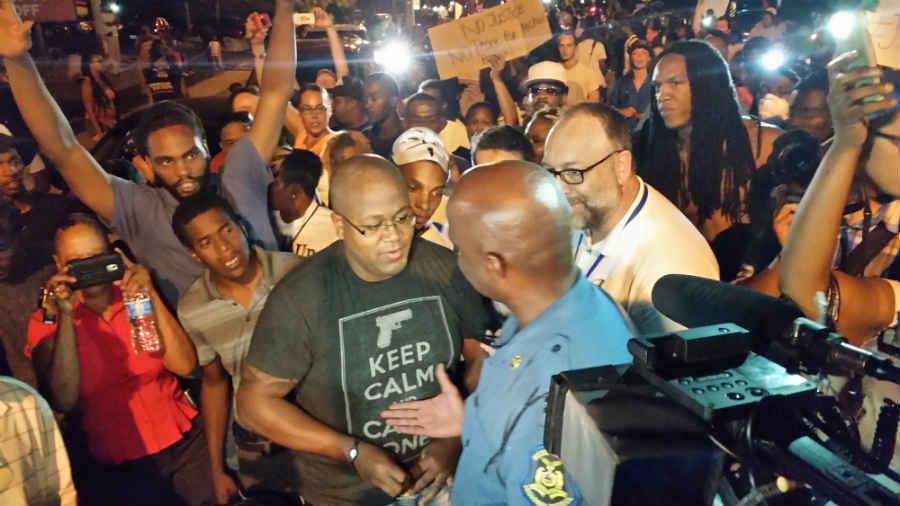 Just down the street from the Ferguson police department, hair salon owner Constance Garnett is praying for the best, but her brothers are helping her prepare for the worst.

The shop she's run for 11 years, Taste of Honey, on South Florissant, now looks like it's ready for a hurricane, completely boarded up.

She takes one look at her shop and shakes her head at the sight.

\"It's hurtful, it's really, really hurtful,\" Garnett says over the sound of hammers and drills behind her. \"We don't have the constant flow of customers that we normally have coming through here because everybody is afraid.\"

But some protesters say that fear is unfounded because the looting that occurred only happened on one night in August by a small group of people and hasn't happened since -- even though there have been protests every single night since August 9, when unarmed teenager Michael Brown was shot and killed by Police officer Darren Wilson.

Bassem Masri, who can be found on any given night verbally lashing out at police, says it is unfair to call the protests violent. They are simply loud, he says.

Masri says whatever he wants to police and believes they should be trained to take it.

\"As far as what's happened within the last 90 days, people would know if you had been paying attention there hasn't been any looting or violence or what not. We've been keeping it peaceful and they are just worried about us using our freedom of speech such as we've been doing. And we've been pushing the limits on that if it's even possible to do that.\"

Police for their part have changed towards the protesters. In the early days in August police were roundly criticized for their aggressive militarized response. Now they tend to stand strong, but not react in the face of verbal abuse and on the few occasions where water battles have been thrown at them.

But police have faced threats. Exhaustion and frustration among them is high.

\"It only takes one in 10 with bad intentions to make the entire situation spiral out of control,\" says Sgt Brian Schellman with the St Louis County Police Department.

\"A few protesters take it above and beyond not just aimed at police anymore but sometimes these threats are going against police officers' families.\"

Ferguson, and indeed much of the St. Louis metropolitan area, is bracing for a grand jury decision on the fate of Ferguson police officer Darren Wilson.

The 28-year-old white officer shot to death an unarmed black teen, 18-year-old Michael Brown, during a confrontation on August 9. Since then there have been protests every single day outside the Ferguson Police department calling for his arrest and indictment.

In this normally quiet town of 21,200, the majority of people -- those who support Wilson and those who think he should be arrested -- do not believe he will be indicted. Though the daily protests have been mostly peaceful since the shooting, few doubt that some level of violence will follow if there is no indictment.

\"I think it will be more violent than before,\" says Dan McMullen as he sits behind his desk at Solo Insurance on West Florissant in Ferguson, the only area where looting and vandalism occurred on one night in August.

McMullen hates to see the business that he's run for 20 years look the way it does. \"I hate the boards,\" he says. But he obliged his landlord who offered to install them.

\"I don't like them here, but I don't want my windows smashed out either,\" he says.

McMullen is one of the few white business owners in this part of Ferguson. He says he knows most residents just want to speak their minds without violence, but he says it's \"the crazies\" that worry him.

\"People who aren't afraid are stupid because fear keeps your mind alert and keeps yourself protected,\" McMullen says. And for him, so does the concealed weapon he carries.

\"I bring an extra gun now only because it has a bigger magazine,\" McMullen says of the added weapon he carries since tensions exploded here over the summer. He says he would never use it to protect his business, but he would use it to save his life.

\"So maybe I get trapped here or something and have to have a John Wayne shootout,\" McMullen says before interrupting himself smiling. \"That's the silly part about it -- is that going to happen? Not a chance. But I guess, could it? I'm the only white person here.\"

McMullen is cautious, but warns others considering getting a gun not to be reckless. When his adult son told him he wanted a gun to protect himself after the grand jury decision, McMullen warned him not to rush into it.

\"People like him need to think about it, and not think about 'I'm worried about this stuff,' \" McMullen says.

At Metro Shooting Range in nearby Bridgeton, Missouri manager John Stephenson says gun sales are up 40 to 50%. And lots of folks are coming in to the gun range for training.

\"Every time that door opens, we're seeing new faces every day,\" Stephenson says. The new customers tell him they're concerned about what is going to happen in and around Ferguson when the grand jury decision is announced.

But Stephenson also advises customers to get proper training, something local officials also stress. Ferguson Mayor James Knowles says a good number of residents have told him they're buying guns for protection. The mayor has warned law enforcement to be mindful that there are a flurry of new gun owners.

\"It is a little frightening to think that somebody who is less trained may not have that restraint.\"

A gun owner himself, Knowles says gun ownership is responsibility that should not be taken lightly.

On the surface, it looks like David Royal is boarding up and cleaning out an old Ponderosa restaurant on West Florissant Road. Instead, he's renovating it.

\"We can change the face of Ferguson, and that's what we're doing here,\" Royal says.

He and a handful of volunteers, some of them also protesters, worked hand in hand with Mayor Knowles for a day to turn the old boarded up building into the Center for Hope and Peace. When it opens, Royal says the Center will help local residents with job training and plug them into existing social services.

\"Even though we have some bumps in the road, we stick together,\" Royal says.

Steps away, at a strip mall with more boards than windows, the Burger Bar and More restaurant stands out. Not just for its signature Garbage Burger, topped with a fried egg, but also because it's one of the few on West Florissant that is not boarded up. The owner, Charles Davis, opened the restaurant the day before Michael Brown was shot and killed.

He suffered through the first round of protests and he plans to stand firm no matter what the future holds.