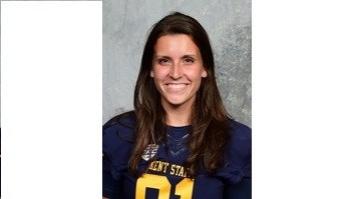 Kent State kicker April Goss made history on Saturday as the second-ever female to score points in an FBS game.

Goss is the backup to Shane Hynes, who regularly handles the placekicking duties for the Golden Flashes. After a touchdown late in the second quarter, Kent State coach Paul Haynes called timeout before the extra point and sent Goss in for the kick instead.

"I was a little disappointed I didn't make a better kick," Goss said after game, via theAssociated Press. "I was sure it was going right, but it did go through. I'll probably beat myself up for that for a little while, but it was awesome."

Kate Hnida, the first female to both appear and score points in an FBS game, converted two extra-point attempts for New Mexico in 2003.