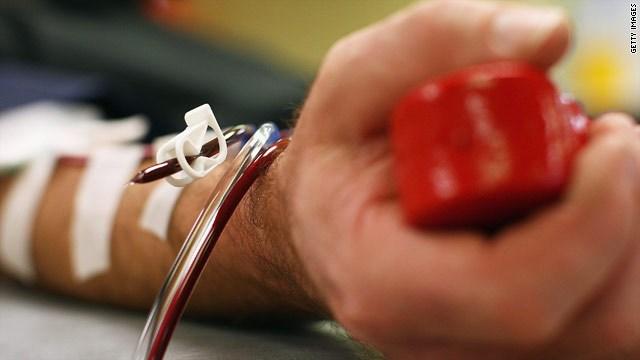 A longtime ban on blood donations from gay and bisexual men may soon come to an end.

Federal health officials are recommending an end to the nation's lifetime ban on blood donations from gay and bisexual men, a 31-year-old policy that many medical groups and gay activists say is no longer justified.

The Food and Drug Administration said Tuesday it favors replacing the ban with a new policy prohibiting donations from men who have had sex with another man in the previous year. FDA officials said that policy is supported by research and would put the U.S. in line with other countries including Australia, Japan and the U.K.

The lifetime ban dates from the early years of the AIDS crisis and was intended to protect the blood supply from what was a then little-understood disease. But many medical groups, including the American Medical Association, say the policy is no longer supported by science, given advances in HIV testing. Gay activists say the lifetime ban is discriminatory and perpetuates negative stereotypes of homosexual men.

Major organizations that run the nation's blood banks supported lifting the ban. \"It's scientifically and medically right, and that's the way we should make policy,\" Dr. Louis Katz, chief medical officer of America's Blood Centers, told CBS News earlier this month. \"Now the safety from HIV and hepatitis is really many orders of magnitude better [than in the 1980s] and those infections are all treatable.\"

All blood donations are screened for HIV; however, the test only detects the virus after it's been in the bloodstream about 10 days. That allows a brief window when the virus that causes AIDS can go undetected.

According to government figures, men who have had sex with other men represent about 2 percent of the U.S. population, yet account for at least 62 percent of all new HIV infections in the U.S.

Tuesday's announcement is the culmination of years of government discussions re-examining the ban. Last month a panel of blood safety experts convened by Department of Health and Human Services voted 16-2 in favor of doing away with the lifetime ban. The panel recommended moving to a one-year ban, which bars men who have had sex with another man during the previous 12 months.

\"Some may believe this is a step forward, but in reality, requiring celibacy for a year is a de facto lifetime ban,\" the organization Gay Men's Health Crisis, a New York-based nonprofit that supports AIDS prevention and care, said after the announcement.

The FDA implemented the ban in 1983, when health officials were first recognizing the risk of contracting AIDS via blood transfusions. Under the policy, blood donations are barred from any man who has had sex with another man at any time since 1977 - the start of the AIDS epidemic in the U.S.

The push for a new policy gained momentum in 2006, when the Red Cross, the American Association of Blood Banks, and America's Blood Centers called the ban \"medically and scientifically unwarranted.\" Last year the American Medical Association voted to oppose the policy.

Last week, U.S. Senator Tammy Baldwin led more than 75 members of Congress in calling on HHS Secretary Sylvia Burwell to end what they call an outdated and discriminatory ban, and replace it with a risk-based policy.

\"I am encouraged that the Obama Administration has taken this step forward because I have long fought to revise this outdated policy that is medically and scientifically unwarranted,\" Baldwin said in a statement Tuesday. \"While this announcement represents needed progress, I remain concerned that it does not achieve our goal of putting in place a policy that is based on sound science and allows all healthy individuals to donate. The Administration must continue to work towards implementing blood donation policies based on individual risk factors instead of singling out one group of people and turning away healthy, willing donors, even when we face serious blood shortages.\"

The agency will recommend the switch in draft guidelines early next year and move to finalize them after taking comments from the public, FDA officials said. FDA Deputy Director Dr. Peter Parks declined to give a timeframe for completing the process but said, \"we commit to working as quickly as possible on this issue.\"