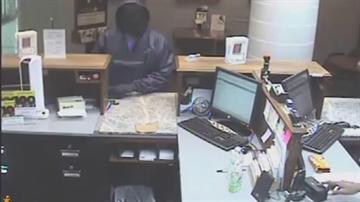 MILWAUKEE- The FBI said that the same bank robber is responsible for two bank robberies at the Guaranty Bank at the Grand Avenue Mall.

Milwaukee Police say the suspect walked inside the bank and placed a note on the counter demanding money.

He also threatened to harm the bank employees.

The FBI added that he kept one hand inside a bag during the robbery, implying he had a weapon.

He was described by the tellers as being calm, relaxed, smooth, and casual.

The suspect placed the money inside of a bag and fled from the bank.

On the way out, he stops and picks up a red cooler and drops some of the cash he obtained from the robbery.

At this point, it's unclear why he did that.

The second robbery happened on August 11, 2014 at the same Guaranty Bank at Grand Avenue.

Once again, the same description fit.

According to the FBI, this suspect may also be connected to a third bank robbery.