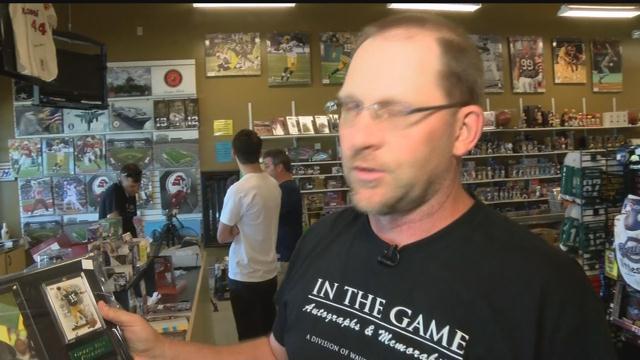 Big news for Packers fans: for the first time in nearly 20 years Brett Favre will be holding a public autograph signing in Southeastern Wisconsin.

It's happening this Friday from 6-7:30 p.m. at Waukesha Sportcards. And as you might expect that business is getting slammed with phonecalls and questions on how to meet the hall of famer.

The first thing people should understand is that the autographs are not free. Your least expensive option starts at $249. But many customers are pre-ordering even spendier options because this is such a rare appearance.

"We're getting questions like 'Is it true? Is he even actually coming? I know you're putting it out there but is he actually going to be there?'" Robb Dobratz, owner of Waukesha Sportscards, said.

Dobratz said he's worked with Favre on a past public autograph signing in Virginia and that may be the reason why Favre's people reached out to him to coordinate a Wisconsin signing.

"He has never done a signing in Waukesha. He did a signing in Milwaukee back in 1997 after the Super Bowl. And that was the last time he ever signed publicly in this area," Dobratz said.

"This is going to be my very first time [meeting him]. And it's a dream. You can ask my husband. He knows. He just said 'Oh my God. This is your dream come true'," Christine Ojeda of Waukesha said.

Ojeda said she paid $379 for a professional picture with Favre but she admits she is nervous because, as a superfan, Friday might feel like a religious experience.

"It was just so much fun when he played. It was like you couldn't wait for Sunday or Monday or whatever day they were playing because you always knew it was going to be a thriller," Ojeda said.

The public signing is also the first since Favre's placement in the Pro Football Hall of Fame.

Brett Favre also shared on Facebook that a portion of the proceeds will be going to the Favre4Hope foundation.