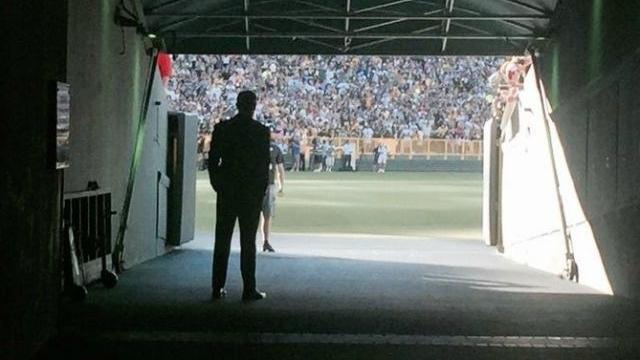 It only seemed fitting that a driving rainstorm accompanied Brett Favre's name and number unveiling in the Lambeau Field Ring of Honor Thursday night. It was just one more factor for Favre to fight through in the place where he battled elements, injuries and distractions to become one of the best quarterbacks in NFL history.

Favre reflected on a night of honors and on a career of achievements Thursday night just after halftime, saying he had grown impatient waiting for the ceremony to happen as Thursday wore on, but adding the event was "pretty awesome".

Favre threw for more than 500 touchdowns in his NFL career, many of those with Green Bay before finishing his career with the Jets and Vikings. Favre experienced Lambeau Field as a hero, as a visitor during his days with Minnesota, and on Thursday night, as a guest of honor.

"We had to stop at security. I was a normal person," said the three-time Most Valuable Player. " I got to see what it's like to watch the game from a box. You can't see anything. Food and people talking to you, it was a different way to see this experience."

One thing that hasn't changed since Favre took over as the Packers starting quarterback in 1992 is the mystique of Lambeau Field.

"I can tell you, and obviously I played other places, there's no place like Green Bay. No place like Lambeau Field."