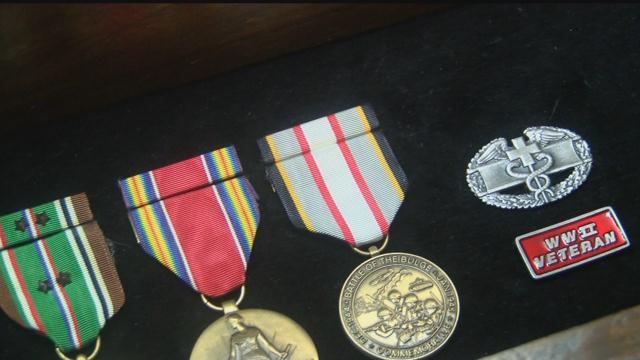 A simple mistake has cost a Racine man a precious family heirloom, and he's hoping the public can help him get it back.

On July 22nd, a group of thieves broke into Patrick Miskulin's unlocked car on Racine's north-side, and stole his wallet from the center console.

That wallet held $300 in cash, but it also held something money can't buy, a St. Christopher medal given to Miskulin by his late father.

"He gave it to me and said this kept me safe, and I believe it's going to keep you safe."

His father Edward, was given the medal by his mother when he enlisted at the age of 17. He carried it with him through the entire war, returning home safely years later.

38 years ago, his father passed along the medal to him. He's kept it safely in his wallet ever since, until last week.

Miskulin says he thought he locked his car when he got home on July 21st, but when he went out the next morning, his car was unlocked, and his wallet was missing. Surveillance video from a neighbor shows three people pulling on door handles in the alley, before entering Miskulin's car.

He says the thieves can keep the cash, he just wants the medal back.

"It's not a war medal, it's not a Purple Heart, it's just a keepsake medal, and it means a great deal to me and my family," he says.

Miskulin was hoping to pass the medal along to someone else who needed protection, just like his father did to him.

"I wanted to hand this on to someone special, and now I'm not able to do that."