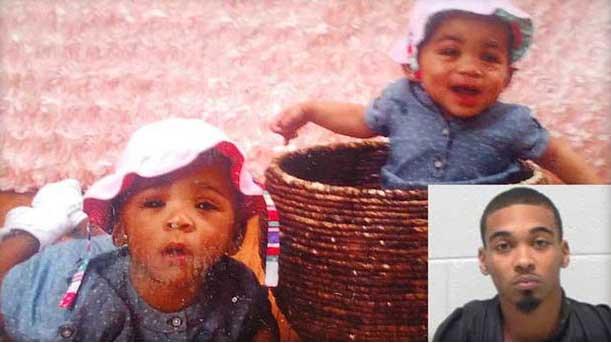 CARROLLTON, Ga. (CBS NEWS)-- Police say a father charged with manslaughter Friday in the deaths of his 15-month-old twin girls had been drinking before he left them in a hot car in 90-degree temperatures.

Witnesses heard screams and saw Asa North running as he carried the toddlers from the parking lot in front of their home to an inflatable pool out back. Neighbors joined him, frantically trying to revive the girls with water and ice packs.

But they were already unresponsive, and soon were declared dead at a nearby hospital.

Outside temperatures were in the 90s on Thursday before police were called at 6:34 p.m. Investigators were trying to determine how long the girls remained in the parked car, but it would take only a few minutes for the heat to become unbearable.

"We do believe alcohol is involved," said Carrollton police Capt. Chris Dobbs, who identified the girls as Ariel North and Alaynah North. "We do believe the father, sometime throughout the day, he had been consuming alcoholic beverages."

North, 24, is charged with two counts of involuntary manslaughter and two counts of reckless conduct, Carroll County jail records show. Police were awaiting the results of blood tests to determine his alcohol level. It wasn't immediately clear whether he had a lawyer who could be contacted for comment.

The girl's mother was at Grady Memorial Hospital in Atlanta at the time, visiting her sister, who had been in a serious car crash Wednesday, Dobbs said.

It wasn't immediately clear who discovered the girls in the back of the SUV.

"The neighbors heard some screaming - I guess coming from the father - and saw him running around back with the two children," Dobbs said. "One of the neighbors got some ice packs out of the freezer and carried it out there."

Arriving officers performed CPR, but the girls were too far gone. Autopsies were being done at the Georgia Bureau of Investigation crime lab, GBI spokesman Scott Dutton said Friday morning.

The girls are the 25th and 26th children to die this year in hot vehicles, more than double the number by this point last summer, said Janette Fennell, president and founder of KidsAndCars.org, a group that tracks such deaths each year. By this date in 2015, 12 children had died in hot cars, Fennell said in an email Thursday night.

Temperatures inside a car can become deadly very quickly, with 80 percent of the increase happening in the first 10 minutes, her group warns on its website.

The twins died as prosecutors in another metro Atlanta county prepare for themurder trial of Justin Ross Harris, 35, who is accused of intentionally leaving his toddler son to die in a hot SUV for about seven hours in 2014.

Harris' trial was scheduled for September in the coastal Georgia city of Brunswick after a judge agreed with defense lawyers that an impartial jury could not be found in the Atlanta area.